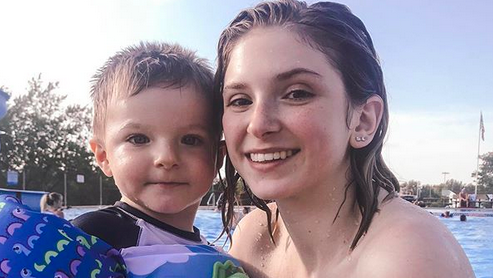 McKayla Adkins, one of the stars of TLC’s Unexpected, recently shared that she’s considering plastic surgery. In an Instagram story, the young mom of two shared a selfie. Then, she wrote, “Hey guys, a lot of you are asking so the surgery I want is a BBL and breast augmentation.” BBL is the acronym for a Brazilian butt lift. Recently, the teen mom also got lip injections. 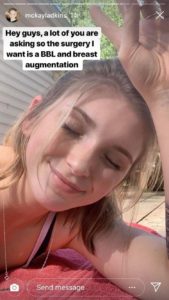 This news came prior to McKayla putting out a new YouTube video.

In the video, McKayla talked about her mental health struggles. She also mentioned that she is running out of money. In the video, she said, “I might not be in college for much longer for the simple fact that right now I’m not really making any money because I don’t have time for Youtube, which, as most of you guys know, Youtube is my job. And I just don’t have time for it any more. So I haven’t been making videos, which means I’m broke pretty much. And I need a job, whether it’s Youtube, whether it’s actually going out and getting job, which I’m applying to a few places today.”

Just filmed my Q&A GRWM hopefully it’ll either be up tonight or tomorrow morning 💕 turn on post notifications!!!

Right now, fans aren’t particularly happy with McKayla. They think she is unnecessarily dramatic. They think that she needs help and that she needs to grow up. Fans of the TLC show especially don’t like the way that McKayla treats her kids’ father, Caelan Morrison. On Unexpected, McKayla recently gave birth to her second child. She is trying to keep her kids from Caelan’s mom, Shelly.

As expected, fans are not happy to hear about McKayla wanting to get plastic surgery. They are saying she is turning into the next Farrah Abraham. Here’s what a few Unexpected fans have had to say about McKayla’s announcement:

What do you think of McKayla wanting to get plastic surgery, even though she’s broke? Leave a comment below.