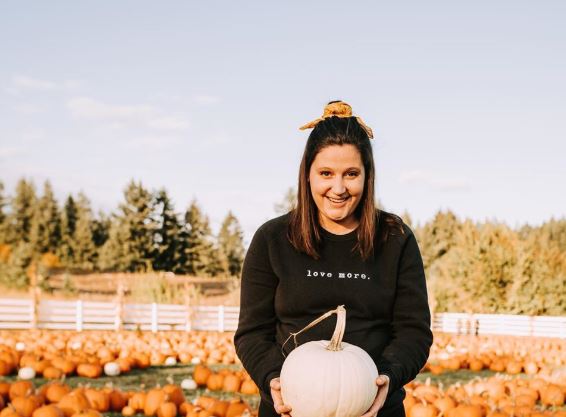 LPBW fans know that October brings us the Pumpkin Season down on Roloff farms in Oregon. Every year, the farm opens for fans and customers to enjoy themselves, meet some of the cast of the TLC show, and select their own pumpkins. The fun-filled festival returns this year, and a while back, we heard that Amy will be there as well. Now, Tori Roloff took to her Instagram to remind us that the season starts on Friday. Plus, lucky fans may get to meet her as she mentioned that she “can’t wait to meet” them.

Tori, Zach, and their son Jackson are firm fan-favorites on the Little People, Big World TV show. With Tori expecting her second child soon, fans hoped they’ll be able to see her or at least chat with her. She’s in her third trimester now, but she’s gonna try and meet people and get out to the Pumpkin Season festivities as often as she can. Posting a picture of a giant pumpkin hiding her baby bump, Tori reminded fans that the season starts on Friday.

In her post, Tori wrote, “Pumpkin season starts THIS FRIDAY! Will you be there? I will try my best to be there as much as possible as it’s my favorite time of year. I can’t wait to meet some of you- the people who make what we do possible!” Well, fans feel the same way, and many of them said they would be there. However, it seems that main season opening will take place on Saturday. So, if you’re a LPBW fan, chances are good that you’ll see most of the Roloff’s there at one time or another.

The season runs it’s usual weeks this year. Opening on October 4, it runs until October 27. Opening hours are between 10:00 am to 5:30 pm. However, it’s only open on Fridays, Saturdays, and Sundays. For those who booked early for the private tours during the Pumpkin Season, the Roloff Rarms website notes, “Your 30-minute, unique and private tour will be given by Matt, Zachary, Amy or Jeremy.” But, that may change initially, as we’re not certain of Amy’s plans right now. LPBW fans heard the sad news that her mom passed away.

However, at some stage of the festival, fans are very likely to see her there. Visitors to the season don’t need to book ahead for a normal day visit. And, parking’s still free to visit the pumpkin patch. Once again, the setup allows for different prices for main activities like the adventure area and wagon tours. Golden Pass tours are also available and everyone who goes there can expect to spot some of the LPBW family busy with the activities. Lucky fans may even spot little Jackson or young Ember. And, it looks like you’ll need to keep your eyes peeled for Tori as well.

Fall is my favorite color! 🧡🎃 🧡 Pumpkin season starts THIS FRIDAY! Will you be there? I will try my best to be there as much as possible as it’s my favorite time of year. I can’t wait to meet some of you- the people who make what we do possible! 🧡 If you’re coming… where are you from?! 🧡 If you want 10% off these @shopalwaysmore love more sweatshirts use my code TORILOVE10 🧡 See you this weekend!🧡🎃🧡

On Tori’s post, loads of LPBW fans said they’ll definitely go this year. Some of them travel from as far away as California. One fan posted, “We are coming from California this weekend! Does the farm open Friday or Saturday?” Well, it opens on Friday, Tori confirmed. Josh Winsor, of the TLC production crew, said he’d be there, but Tori teased him, saying “haha and it’s not because you have to be right? 🤓.” Meanwhile, another fan teased Tori abut Murphy. They reminded us, “hopefully Murphy doesn’t take another person’s babies dirty diaper out of their car!🍂😂🧡.” Tori assured them though, that their rather large dog’s “not invited this year because of this exact reason!”

What do you think about the Roloff Farms Pumpkin Season arriving again already? Are you going along? Do you hope to see Tori, who cant wait to meet fans? Sound of your thoughts in the comments below.

Remember to check back with TV Shows Ace often for more news and updates about LPBW.