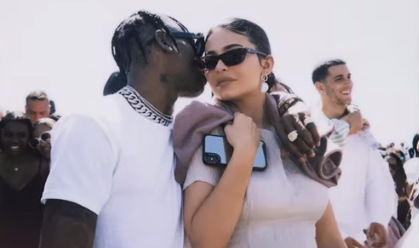 Two and a half weeks before Kylie Jenner and Travis Scott let the news break that they were “taking some time” apart, Jenner explained the things in their relationship that worked. Yesterday it was revealed they have split.

For their part in Playboy’s Pleasure Issue, Travis, 28, interviewed Kylie, 22, and asked her why their relationship “works.” She went on to say they share the same passions and goals in life.

“Besides the fact that we have good chemistry, we have a lot of fun together. You’re my best friend,” she told Scott. “Through all the ups and downs that every relationship has, we evolve together through them and keep getting stronger.”

Last February, the couple welcomed their daughter, Stormi Webster, into the world. They said she did nothing but help their intimacy. Scott commented about the assumptions of having a baby and it harming the intimacy in the relationship. He felt they had the opposite experience and Jenner agreed, saying they have definitely proven that wrong.

Jenner feels that Scott reminds her of the coexistence of motherhood and sexuality. Being a mom doesn’t mean she has to give up her sexuality and being sexy doesn’t mean she’s lost her morals or isn’t a good mother.

Was This Break Bound To Happen Or Was It A Sudden Decision?

According to TMZ, Kylie Jenner and Travis Scott were inseparable throughout the summer, taking a vacation together back in March and the crazy yacht trip for Kylie’s birthday.

But this didn’t seem to stop the events heading their way in the upcoming weeks. Their issue of Playboy released less than three weeks ago, but this Tuesday it was said that the couple was taking a break. This isn’t the first time either, they’ve worked it out in the past. For now, they’ll continue to co-parent with Stormi, as she is and will remain their number one priority.

It was said that they are taking some time away from each other, but this doesn’t mean they’re done. Despite some unresolved trust issues, their issues come from their stressful lifestyles.

The break has not yet been publicly confirmed by Scott or Jenner. Yahoo reported that the couple made the decision a few weeks back. They’ve been trying to make it work for a while, but ultimately decided that a break was the best option.