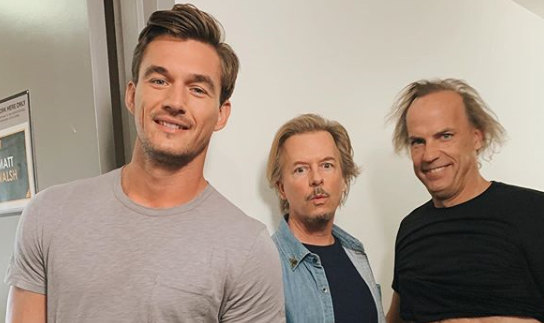 When making out on national television with someone as hot as Hannah Brown, it makes sense Tyler Cameron might have gotten excited. With so many people watching and the camera crew right there, he had to make sure he kept how excited he was under wraps. Now he’s sharing exactly how that worked in what could be considered a TMI interview with The Ringers, ‘Bachelor Party’ podcast according to Page Six. When things got hot and heavy in Greece, he said steps were taken to make sure his privacy stayed private.

During Season 15 when he placed second in Hannah’s lineup of hotties, he got to spend some time up close and personal with the leading lady. When they made a trip to Latvia, the making out got really serious and he was worried he was going to give America the wrong kind of show. Hannah asked if she should walk in front of him, so at least the two communicated about things.

Tyler Cameron said he was able to keep it under control when they were in Greece, in the castle. He said there were a couple touch and go moments. He wore really tight pants and that saved him from an embarrassing appearance. In Latvia though, he thought his pants were way, way too tight. The reality hunk said, ” “We were making out, and they’re like, ‘All right, guys, we have to go. We have to go.’ And I was like, ‘No.’” But of course, when the producers say you have to go, you go.

Got a new apartment so I’m acting brand new

Some of the footage shot in Greece and other times didn’t make it to the final cut. Fans have to wonder if it was solely for that reason. Now, Tyler Cameron can look back at his time on the show fondly while hanging out with his friend Gigi Hadid. Though the two have been romantically linked for a while, he recently told Cosmo, “that’s my friend. We hung out a few times, and she’s killing it in Paris.”

Fans think they are just trying to keep it under wraps so they have some privacy. The media goes crazy every time they’re seen together. So he throws some mixed messages, but at least he maintained a wholesome-ish appearance on The Bachelorette.