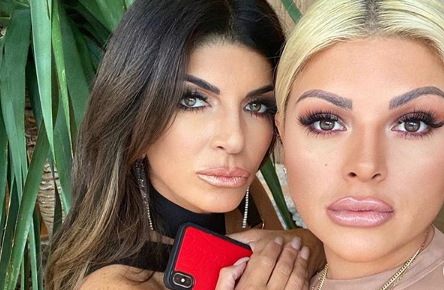 Bravo, News, Reality TV
Share on Facebook
Share on Twitter
Share on Pinterest
Share on LinkedIn
Season 10 of Real Housewives of New Jersey is sure to be full of emotion. With Teresa Giudice fighting with both her husband and her daughter, the trailer is explosive. With the stakes being Joe shipped out of the country, it makes sense tensions are running high.
The trailer shows a phone call between the couple and Joe is angry about a rumor that Teresa cheated on him while he’s been incarcerated.  On the phone, he says, “alright, like I even wanted to get married? No.” That seems harsh.

Why Teresa Giudice is Fighting With Her Daughter Gia

Happy Birthday to my ride or die @kariannefischbach You are so special in my life, I don’t know what I would do without you!! You’re amazing and beautiful inside and out, my girls and I are so lucky to have you!! You’re part of our family, love you have the best birthday ever! 🎁💕🎊🎉🎂🍾❤️😘🎈🎂🎊💕😘❤️🎈🎉🎈🍾

After Teresa Giudice hears that from her husband, she looks at her daughter and says, “see what I get.”  This upsets Gia who yells that it’s enough and that’s her personal business with her father. In a post on All About The Tea, a source says that Gia is the mature one of all the girls.
They said Gia has been a rock for Teresa Giudice and her whole family during the whole legal battle. She’s been their emotional support from the beginning. The rumor about Teresa came from pictures of her with a younger man. It looks like she’s holding hands with him, but she maintains he was just helping her out of the car.
In the trailer, Margaret Josephs add fuel to the fire by saying she was, “cocktailing it up all night,” with some guy. Meanwhile, Melissa Gorga says she’s out of control and embarrassing. Later when Teresa Giudice throws a glass she yells at the women to tell her who said she was cheating.

This Season Will Test All Of Them

A source said this season will be a lot of fighting between Gia and Teresa  Giudice on the show. They said she’s used to seeing rumors spread about her mom, so she just ignores them even though it’s hard sometimes. She just wants her dad to come home. Gia has had to be stronger for him as well. Reports have come out lately that he’s losing hope and becoming bitter having been in ICE custody for so long. Despite filing many appeals to stay in the country, Joe’s been denied at every turn.
Andy Cohen and several other Real Housewife personalities are pulling for him, but it’s all in the judge’s hands now. This season is going to deal with some heavy issues and in the middle will be Teresa Giudice and her family.