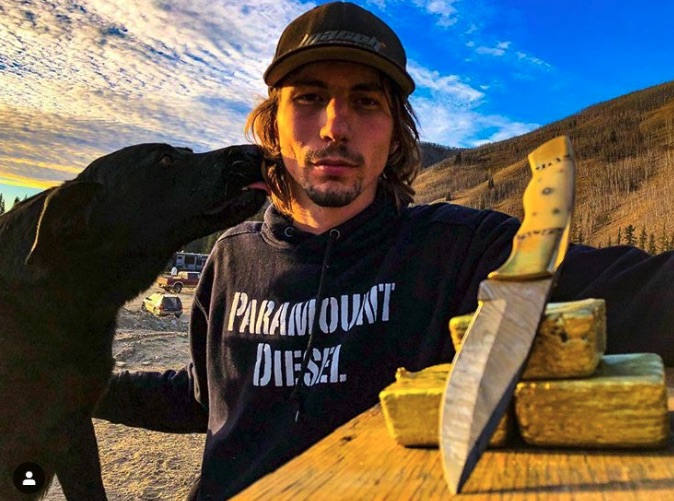 Over the weekend, Gold Rush star Parker Schnabel was featured in the London Times. He discussed what is he is best at and what he may want to do after his gold mining career is over, including starting a weed farm. What all did Parker reveal?

The Times of London wanted to meet Parker Schnabel. They wanted to know more about this millennial Kylo Ren doppelgänger who has mined over $25 million of gold on the Discovery show. But what they found is that Parker Schnabel is not your average gold miner. He doesn’t have gold fever per se. He explained his feelings about gold mining have more to do with doing that thing he loves, when he explained  that “It’s just something I sell so that I can keep mining.”

What Parker Schnabel is good at is moving dirt–and moving it fast. He and his sparse team can plow through a cut and efficiently end up with millions in gold. He learned from the very best, his grandpa John Schnabel. Parker’s philosophy is to go through as much ground as possible and run that ground for gold. He opposes the method of trying to get every single speck of gold in a smaller area. Parker’s method seems to be pretty successful. This season we will discover if he can mine twice as much land in the same amount of time as he did last year.

What is Next For Parker Schbabel?

Unlike most millennials, Parker is already a decade into his career and is starting to think about his future career. Parker suggests that maybe he should flip burgers instead of starting another new tv show or more gold mining. It’s pretty hard to imagine Parker telling anyone “Want fries with that?” and William Leith tells him so. But Parker seems more to care about something else, as he replied, “It might be good. It might be what I need, William.” Sounds like Parker has been thinking about his own happiness while he is mining his millions.

Then Parker shared, “I kinda want to start a weed farm.” He clearly was not referring to ragweed or dandelions. He was talking about marijuana. If he elaborated on where he would move to make this happen or other related plans, we don’t know. While moving dirt around has been profitable, Parker has always been someone who has aimed high. This could be a very profitable second career.

But, Parker did reveal that he would really like to take a summer off. Maybe he has seen former Gold Rush star Todd Hoffman’s social media? Todd had shared that gold mining was hard on his family and marriage. Now he has been filming keto recipes in the kitchen, and hanging with family. Parker may see that and feel it is time for him to take his own life back.

“I kinda want to enjoy a summer not working. That’s probably what’s next. The idea of a Corona on a beach right now sounds pretty damn nice.”

Perhaps he really may consider giving up gold mining in order to allow himself a personal life. That beach setting and Corona area more fun with someone else. What about a girlfriend? He did mention his breakup with Ashley Youle to the publication. He has always acknowledged that his work got in the way of their relationship. Maybe he is ready for the next phase of his life?

Parker Schnabel fans, what do you think of his idea of starting a weed farm? Share your comments below and be sure to come back to TV Shows Ace for the latest on Parker Schnabel and Gold Rush. Gold Rush Season 10 returns to Discovery on October 11.