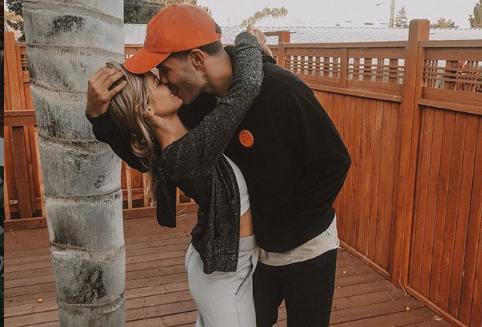 Hannah Godwin and Dylan Barbour make an absolutely photogenic couple on Instagram. Fans want to know all the tea about their relationship now that Bachelor in Paradise is done filming. They are very into each other, but are they living together?

Having gotten engaged during the season finale, fans saw they were the rock-solid couple during all the drama according to The Cheat Sheet.  Of course, just because a couple gets engaged doesn’t always mean they’ll stay together. Hannah and Dylan are vacationing in Paris and documenting the whole thing.

Are Hannah Godwin and Dylan Barbour Living Together?

During an interview the two said while Hannah Godwin had moved to L.A. to be closer to him, they weren’t living together. He lives in San Diego. He did say they still spend as much time as they can together. The couple makes sure to split their weeks to make it happen.

They are both busy people and while Dylan said they were going to live together, they also want to make sure the timing is right. They are happy but aren’t rushing down the aisle. Hannah said they talk about it a lot and how excited they are. She said it was important to just enjoy their engagement because they’re young. When they’re able to move in together they’ll start talking about the wedding. They’re just taking their time and being happy spending time together.

The Two Reality Stars Really Are In Love

In the interview with Glamour, Dylan said fans didn’t really get to see the real Hannah Godwin. It felt like their relationship was overshadowed with the whole Blake Horstmann thing. He didn’t feel like the cameras caught how much she was leaning towards him. He said she blew him away and he’s clearly smitten with her. For her part, she said Barbour took her by surprise and it’s all real. Hannah said you can’t plan a connection like that.

There is no doubt fans and their fellow Bachelor nation co-stars are routing for the couple. One fan wrote on a recent post, “give me tips on how to have a good relationship like you and Dylan.” Caelynn Miller-Keyes commented on a picture of them kissing, “Yes, so happy!” Other fans and celebrities have wished them the best on social media. They’ll be watching to see when they set a date to get married and finally move in together.