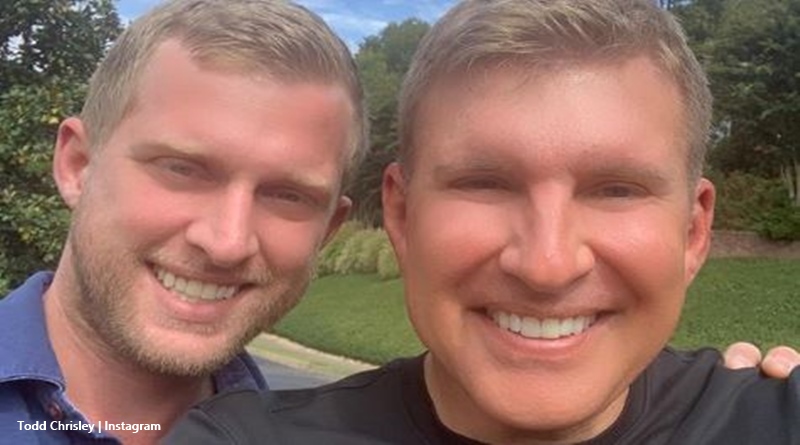 Todd Chrisley and Julie run their Chrisley Confessions podcast. Now, Todd took to his Instagram and shared a photo of him and Kyle. Kyle’s looking in a really good place now, and Todd told people he joined them on the podcast. There, he talked about being a stepchild.

Todd Chrisley and Julie get joined by son Kyle, who recently attempted suicide

Fans of Chrisley Knows Best saw Kyle ages back on the show. He disappeared after that, but he’s now back. Recently, he got hospitalized, and later he confessed it was a suicide attempt. If you don’t know, Kyle’s the dad of little Chloe, the horse-mad kid that Todd raises as his own daughter. So, he and Todd had some issues over the years. But after his hospitalization, TV Shows Ace reported, “Kyle used to not talk to his dad Todd, but they have worked things out. Now it is Lindsie Chrisley that isn’t speaking to the family. Hopefully, someday they can find a way to work it all out. It is great to see Kyle around spending time with his family.”

Kyle joined his parents on the podcast before, to talk about the suicide attempt. Now, he went on it again to talk about being a stepchild. On Instagram, some fans of Todd Chrisley didn’t know that Julie was not a birth mom to Kyle or Lindsie. The two older kids’ mom was a different person. While Lindsie asked Julie to adopt her at age 18, Kyle never did. Now, he and Todd seem reconciled after his various addiction problems, he’s opening up more and more.

Kyle is back to talk about being a step-child, Julie and I give testimony to our new therapist, and some outreach from one listener to another. Plus a book recommendation from Julie. Join in the conversation! Call and leave a message!! #chrisleyconfessions @applepodcasts

Kyle’s chat about being a stepchild is very straightforward

They took off talking about how Kyle feels great. Todd joked about his dad being “hot.” They also talked about Chloe’s first concert last night. Kyles daughters’s been “doing amazing at school,” so it was like a reward and Todd shared videos of the happy kid, with Kyle. Kyle and Todd talked about being a stepchild. Todd asked him “how he felt” about being one. Todd said through his experience, that he “never felt he was not treated like the other kids.” Julie said that she got on raising Kyle better than the girls, as she as more a raiser of boys. And, Todd felt girls were easier to raise.

They noted that the boys give them a hard time. Nevertheless, Kyle felt he’d rather have had his real mom. And, yes, Kyle said “yes,” he always “hoped his natural mom” would step in for him. He also noted that Todd “overcompensated” for not allowing Julie to discipline them. Jule noted though, that “parents do make mistakes.” However, they should just “do the best” they can. Julie knows some decisions they made did hurt the kids. Todd Chrisley “set the boundaries” but he thinks he failed as things were a bit out of whack. In fact, he told Julie he could never love her as much as his kids. But, Julie tried her best, and it looks like it’s coming together now, for Kyle and his stepmom and his dad.

Fans in Instagram react to photo of Todd and Kyle

Over on Instagram, Fans of Todd Chrisley responded to the photo and the fact that Kyle’s opening up. Here’s what they said about it:

What do think about Kyle opening up on Todd Chrisley and Julie’s podcast? Are you glad to see him looking in a good place right now? Sound off your thoughts in the comments below.