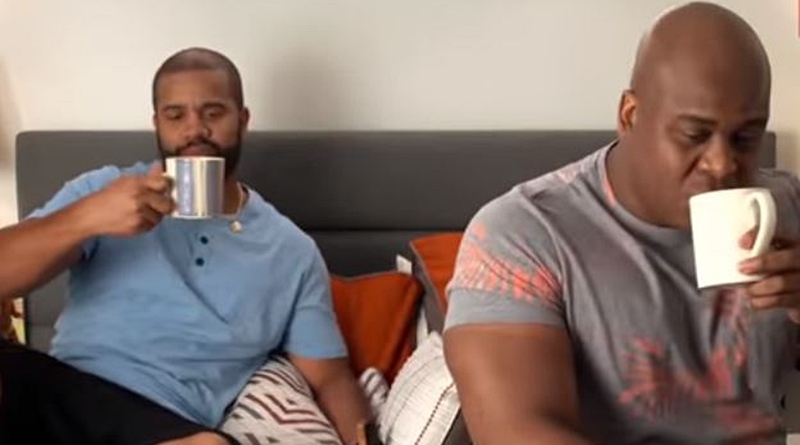 90 Day Fiance: Pillow Talk brings Dean Hashim and Tarik where they comment about the current 90 Day Fiance shows.  So far, fans enjoyed their bantering and quips as the cast sometimes make some inconceivable decisions. Almost borrowing from the live-tweeting that goes on during the shows, TLC brings these castmembers out to react to the scenes. Fan-favorites, Dean and Tarik bring a lot of laughs. But the unfortunate comments made by Dean about Tim Malcolm’s gender really aren’t okay.

TV Shows Ace reported about Tim and suggestions that he’s transgender. Back on September 11, we noted that he reacted to comments about it. We wrote, “On his IG Q&A, one fan asked him about his femininity. They wrote, ‘Why are you so feminine? US women like men very menly…if that’s a word!’ Seemingly a bit taken aback, The 90 Day Fiance star replied: ‘I don’t live my life to please strangers.’ He added, ‘I have never had a problem having a girlfriend, so clearly there are some women who like men like me.'”

Addressing his sexuality, he described himself as “metrosexual.” Explaining this to fans of 90 Day Fiance, we noted that these are men who take care of their style and it’s of European mannerisms. In fact, in Europe, this sort of man has the time to take care of his appearance because they generally have the time and resources to do so. In fact, many of them are extremely male in every respect, except they take of themselves and appreciate art and finer things in life. But, it’s obvious Dean Hashim’s never heard of much of the finer side of life, given his recent comments.

Dean Hashim’s comments featured on The Domenick Nati Show. he never actually said this on the 90 Day Fiance: Pillow Talk show. He said, “The way he crossed his legs, man, it don’t look like he got a pair of balls between ’em.” He added, “I don’t know man, I can’t even cross my legs like that man, I’m blessed, you know what I mean?” Then he said, “He crosses his legs more feminine than she do.” To make things worse, he threw in what he said Tarik felt about it. The 90 Day Fiance: Pillow Talk star alleged that Tarik thought Tim “used to be a female that turned himself into a man.”

Taking it further, Dean suggested Tarik said, “He trying to grow up here, you know…It ain’t ready, it ain’t fresh out the oven yet man. He can’t pull his pants down yet you know?” Finally, he displayed his own ignorance on matters transgender involving bottom surgery. He said, “I think what it is, when they get that sex change, they gotta give it time for that peter to grow, like a sprout.” One angry follower commented, “These two big ignorant bums, Tarik and Dean, couldn’t give me a read on anybody. especially the dumb crap pulled on those two by orential girls. Tim is nobody’s transgender. He is a man that many women would love to know.”

Well, it’s not okay to diss transgender and the size of privates on TV shows. After all, it’s widely thought Derick Dillard of Counting On lost his job over homophobic comments about Jazz Jennings of TLC’s I Am Jazz. Plus, on MTV, Teen Mom‘s David Eason got the chop after his homophobic rant online. Plus, it’s fairly obvious Dean never watched some of the IG Stories and posts by Tim on his occupation. Seen him fire off a .50 and .58 pistol yet? That’s some guns, nothing soft about them. Even the 90 Day Fiance gun expert said, “I just saw Jesus.”

Tim’s successful career as the owner of Gringo Custom Guns describes him as an expert in “1 of a kind firearms. Custom Colts. Gold plating, stainless polishing, blue nitrate, engraving. Specializing in 38 super. Fully licensed and bonded!” Now, that’s not to say a woman can’t do this kind of job, but across the community, he’s got some tough followers, men and women. And, not one of them ever suggested Tim’s a girl or transgender. And even if he is transgender, it’s simply not right to ridicule people in public. For a start, it’s a huge insult to those in the transgender community.

No, Dean, it’s not okay to say this on a show

The Hollywood Gossip noted that Tim reacted to Dean and Tarik. He said, “Now even the cast with this s–t.” He added, “Always remember…Rumors are carried by haters, spread by fools, and accepted by idiots.” THG also noted, that it’s not okay, and “labeling a cisgender person as trans isn’t just rude to a lot of people — it’s transphobic.”

What do you think about Dean Hashim’s unfortunate comments on Tim Malcolm’s gender? Do you think they were simply “not okay?” Sound off your thoughts in the comments below.