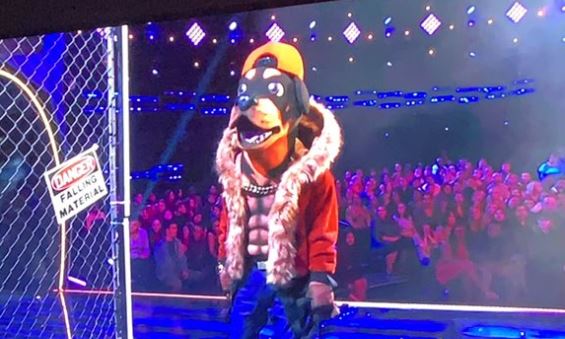 Tonight on The Masked Singer fans got to see the Rottweiler. Everyone wants to know who this could be. They were not a very tall person and a lot of speculation is going around. Let’s look at who it could be.

Heavy shared a bit about the big clues from the Rottweiler. He did say something about “Friday Night Lights” in his package. This could mean someone from the show or that plays football.

If you listen to the voice, it was clear this person knows how to sing. The Rottweiler could be a professional singer. This is why the name Chris Daughtry is being thrown around a lot. He was on American Idol but hasn’t been putting out much new music lately.

For now, TV Shows Ace is going to guess it is Chris Daughtry as the Rottweiler, but once more clues come out that could end up changing. His band Daughtry does have tour dates coming up in October, so that is one thing that causes some confusion on this guess.

Thank you all for the LOVE this week!!!♥️♥️♥️ We felt every piece of it!!!🙏🏻🙏🏻🙏🏻 5 shows in 6 nights! Shoutouts to #newyork , #newjersey , #connecticut and #pennsylvania TOMORROW 8.30 @turningstone #NY SATURDAY 8.31 @hardrockhcac #NJ #atlanticcity #hardrock See you there!

The Rottweiler on Masked Singer said “I’m a total perfectionist, and I’m going to work my tail off to earn your puppy love.” The performance of Maneater was a great one. They did win against the Ice Cream and get to stick around another episode.

Here is what the fans are saying on Twitter about who they think is the Rottweiler.

#TheMaskedSinger okay, im putting my theory out here. The Rottweiler is NOT an nfl player. Nfl is active right now. What coach is just gonna say “aight homie. You good to go sing on stage in a Rottweiler costume instead of practicing to beat tom brady”. Nah.

#TheMaskedSinger I think the Rottweiler might be Chris Daughtry

Rottweiler is OBJ from the Cleveland Browns. Did you see his watch also? He’s Been wearing on field past few weeks #TheMaskedSinger

Who do you think the Rottweiler is on The Masked Singer? Share your thoughts in the comments below. Don’t miss new episodes on Fox so you can see as everyone is revealed this season.