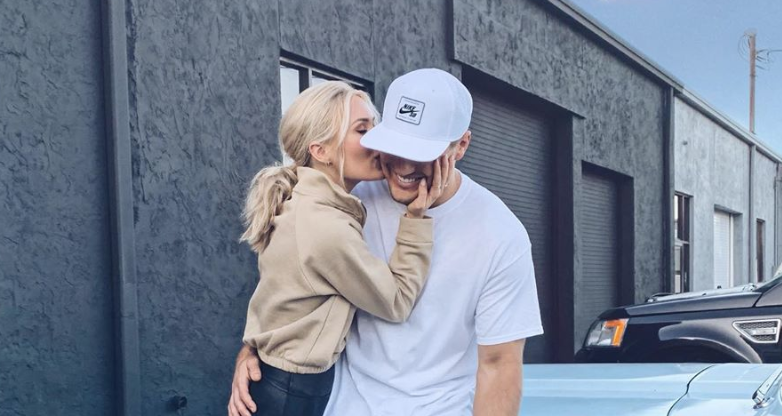 Colton Underwood and Cassie Randolph had a rocky start to their relationship. However, now, they are completely in love and apparently, an engagement could be right around the corner.

Colton Underwood and Cassie Randolph Could Be engaged

In the beginning, it didn’t look like Colton and Cassie were going to make it. After all, she went home during his season of The Bachelor. However, they have been going pretty strong ever since. Now, Bustle says an engagement might happen sooner than everyone thought.

Apparently, Colton is just smitten with Cassie and everything about her a source close to the situation said.

“He feels so blessed to have her in his life and to call his person. He is obsessed with her and loves being with and talking to her every day, even if it’s about silly little things over text message. They have a lot of fun together. Colton has also gotten very close with Cassie’s sister, Michelle, and Michelle’s boyfriend, Gregg Sulkin, as well as a bunch of Cassie’s best friends,” the source said.

im in love with these moments

What does Cassie want?

There has even been talk of Colton proposing in the next few months. However, Cassie isn’t on the same page. The source says that Colton is more into Cassie than Cassie is into Colton. She does really love him though, she is just more traditional. Apparently, the thought of marrying him at such a young age makes her pretty nervous.

“At the moment, he definitely has stronger feelings than she does, though. Cassie grew up with very traditional values. The thought of taking the next step in their relationship scares her at times because she is still very young.”

While this is pretty sad for Colton, her reasoning makes sense. They could both change as they continue to get older. Luckily, Colton knows that Cassie isn’t in a rush. Hopefully, this means that he will wait until he knows Cassie will say yes.

It would be so awkward if she said no and would probably put a huge strain on their relationship. It would probably be a sad reminder to Colton of the first time she turned him down on the show. Probably not something he wants to go through.

Do you want to see Colton Underwood and Cassie to get engaged? Or, do you think she is still too young? Let us know in the comments.

Come back to TV Shows Ace for news on all of your favorite Bachelor Nation stars.