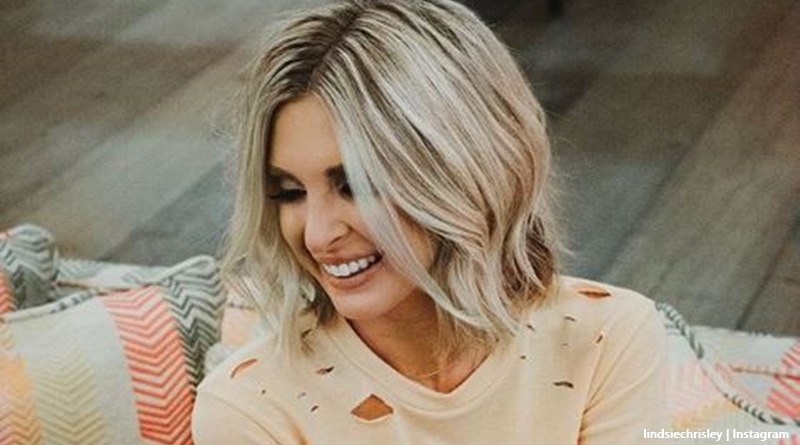 Lindsie Chrisley’s certainly not worried about her dad, Todd Chrisley outing her on television for alleged affairs by the look of it. Celebrating her 30th birthday this weekend, she shared that she’s “Thirty, Flirty,” and “Thriving.” And, no mistaking it, she looks really good as she enters her fourth decade of life. So many young people freak out when they hit 25, and then say 30 makes them depressed. But, Lindsie’s looking rather upbeat about it. Also, TV Shows Ace reported she and her husband are resolving their problems “after a lot of nasty rumors came out.”

On Sunday, Lindsie shared with her fans just how she’s tackling turning 30-years-old. Taking to her Instagram, she shared a rather stunning picture of her. She knelt on a sofa, with a bottle of bubbly nearby. In her two-piece and a big sunhat. she held up two balloons with the inscription, “Thirty, Flirty, Thriving,” on them. She captioned it with, “I think I’ll take a moment, celebrate my age, the ending of an era & the turning of a page.”  The rest of it followed, and it’s taken from the well-known song titled My Next Thirty Years by Tim McGraw.

Fans and friends reacted to her post, and some nice messages went her way. Robby Hayes replied to her, saying, “Happy Born Day LC 💛.” To that, Lindsie graciously said, “Thank you Robby! 🤪” Meanwhile, talent developer and YouTuber Domenick Flores reminded her “#30AreTheNew20s.” But, in response to that, Lindsie replied, “30 feels more trendy than 20.” Kailyn Lowry, Teen Mom 2 star and Lindsie’s partner on Coffee Convos said that Lindsie looked “awesome” in the photo.  Meanwhile, Taylor Brandenburg, style and beauty blogger wrote, “Birthday queen! 💗.” Many other well-known personalities sent in the congrats and best wishes.

Of course, Lindsie Chrisley picked up many fans during her life, and lots of them follow the Coffee Convos podcast. There, they get lots of advising and hear about a range of issues faced in life. So plenty of comments rolled in from fans. One fan said, “Happy triple birthday queen may god bring you full of happiness, kindness, tons of love, peace and fun cheers for many more 🎂🍻.” Another said, “Beautiful!! You have always been strong and beautiful!! You are an amazing woman!! Cheers to 30s! Happy happy birthday!!”

Actually, it’s nice seeing Lindsie keeps so many fans and followers despite the ugly rumors that surfaced after her Dad Todd spoke out against her alleged affairs. Obviously, it hurt, and she’s not about to forgive him any time soon for allegedly attempting to extort her over a s*x tape. In fact, she said several times, that’s just not gonna happen.  So, news that she and her hubby got through it okay also sounds like good news to her many fans as she celebrates her 30th birthday.

What do you think about Lindie Chrisley feeling “Thirty, Flirty and Thriving” on her 30th birthday? Do you think she looks awesome in the photo? Sound off your thoughts in the comments below.

Remember to check back with TV Shows Ace often for more news about Lindsie Chrisley.