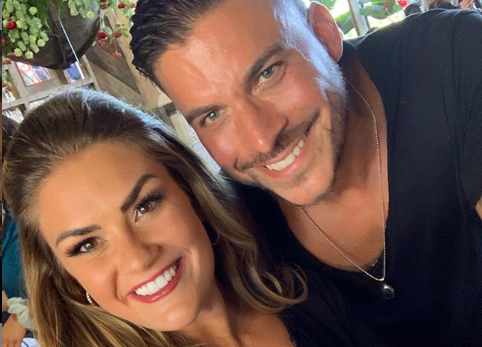 By now everyone knows about Lala Kent and Randall Emmett battling 50 Cent on social media. Some of the other SUR employees are coming to their defense now.

Brittany Cartwright and Jax Taylor have spoke out against 50 Cent’s actions against the Vanderpump Rules couple. In a Hollywood Life interview, Jax Taylor said, “you know he looks stupid, he’s the one that looks dumb to be honest.”

Reportedly 50 Cent took his posts down because he didn’t want to give Lala Kent anymore attention, not because the argument is over. He’s gotten a lot of positive feedback from trolling her so he won’t just back off anytime soon. A source said the fact that he deleted the posts means he’s over the feud for now. They said he does this and will take the posts down when he’s over it. If either Randall or Lala says anything else, he’ll do it again.

Jax Taylor also said if you read all the comments everyone is going after him, not her. He said that’s how bullying is. Most of the comments on 50’s posts were praising the rapper and telling him to speak his truth. The comments on Lala’s social media went against 50 because they were her fans.

Jax said, “it’s crazy that a grown man is going after a 100 pound girl.” He stated that a lot of people have done worse to him, he shouldn’t go after a girl.

Happy Birthday to this gorgeous girl! Love you so much boo and I hope your day is as fabulous as you are!! 😘❤️👑

Brittany Cartwright Also Had Some Things To Say About The Situation

Jax Taylor wasn’t the only SURver to have Lala’s back. Brittany Cartwright also had some things of her own to say about the feud. She said there’s no truth to his comments and that’s the worst part. “Whenever someone straight up lies about you,” she said. “Lala’s trying to stay positive, she’s not trying to look at stuff.” Brittany said she doesn’t understand it at all. She said her friend is really strong and has been sober for a year.

Jax Taylor said, it’s sad to see people trying to turn over a new leaf with people going after them. He said, “you can’t win. Even when you’re an a**hole, you were young… you better yourself and you can’t win.” Some fans would think he might be talking about himself a little too. Both 50 Cent and Lala Kent have said neither will apologize to the other so the feud lives on.