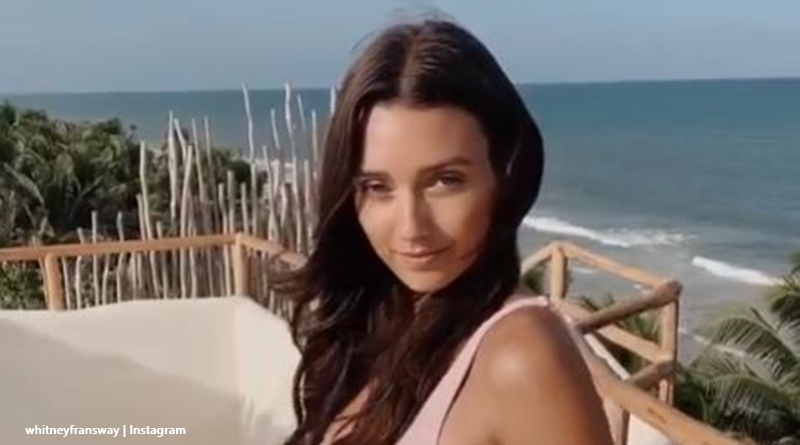 Bachelor in Paradise fans hoped that the fairytale romance between Connor Saeli and Whitney Fransway worked out.  However, TV Shows Ace reported on Thursday that they split up after just two months of dating. Connor came out about the break-up, saying that “they pretty much decided that the relationship’s not going the way that they feel happy about.” Additionally, he felt no hard feelings came with the split. Now, Whitney Fransway spoke up on IG, giving her side of the story.

On The Bachelor in Paradise season, we saw Connor hoping that Whitney would walk down those stairs. And, she did. However, by then, he’d decided he wanted out. If he couldn’t fall in love with the right person, he’d rather not be there. But, when Whitney arrived, she went to his hotel and they took it from there. Although things already looked serious between them at the wedding of  Chris Randone and Krystal Nielson, it never lasted.

From Connors side, they simply rushed it too much, He felt they never really got to know each other, important steps in a relationship. Plus, working a long-distance relationship’s never easy. According to People who reported on the split, Connor said, ‘the fact that we had to be private about it (as BiP still aired at the time) made it even harder.'”  Well, now that Whitney also spoke up, fans of Bachelor in Paradise get a clearer picture about it all.

Whitney’s version of the split from Connor

Taking to her Instagram on Sunday, Whitney addressed the breakup. She posted a long explanation. In her post, she noted that, as Connor mentioned, there are no hard feelings. In fact, she describes them as “still on good terms and ultimately, still have the foundation of a friendship.” Like her Bachelor in Paradise co-star, she agreed that they “had an instant spark.” Just as Connor described, she noted that a “long-distance relationship” made things hard.

Whitney says they got down to some serious talk about their relationship “at the end of August.” And, it seems that while they weren’t at odds with each other, they mutually agreed that the spark was going. In her words, Whitney described is as, “The connection we had wasn’t igniting as much as it did in the beginning.” Nevertheless, they still care deeply for each other. She says she has “nothing but respect for him.”

Since I’m getting so many questions about Connor and I; Here ya go: Connor and I really hit off at Paradise this year. We had an instant spark between us. When we left Paradise, it allowed us to explore that spark further. Jumping into a long-distant relationship, right after, made it more difficult. At the end of August, we started having more serious conversations about where we saw our relationship going. We have been nothing but honest in communicating our feelings throughout the relationship, but we came to a conclusion that it just wasn't working right now. The connection we had wasn’t igniting as much as it did in the beginning. I have grown to care for him very much and we have shared a lot of memories together in the past few months. I will always have nothing but respect for him. We are still on good terms and ultimately, still have the foundation of a friendship. We have mutually decided this is the best decision for both of us. Thank you to everyone who was rooting for us and has been so so supportive. I appreciate it so very much. Love you all!

Mutual decision to break things off

The Bachelor in Paradise alum noted that the two of them both agreed to break things off. Both of them felt it the best thing to do.  In the end, Whitney said they felt grateful for all the fans that were “rooting” for them. So, our two stars moved on, amicably, and at least, apparently not heartbroken.

What do you think of these two versions of the split between Whitney Fransway and Connor Saeli? They both seem so similar, that either they made a pact to say the same thing, or they genuinely broke up the way they described. Sound off your thoughts in the comments below.