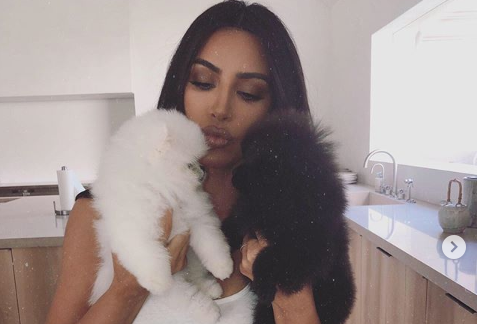 Kim Kardashian already has one Pomeranian, Sushi. So what would be more fitting for the new pups ‘Saké or Soba’?

The Kardashian West family has brought two new Pomeranian puppies into their famous household, but they need help deciding their names!

Kim, 38, showcased the new adorable pups on her Instagram with the caption, “Meet our new babies!”

Since their first Pomeranian is named Sushi, Kim explained they want to keep the theme going and name the new pups something related.

“North came up with names that go with our other Pomeranian Sushi,” the caption read. “She wants the white baby girl to be named Saké and the black baby boy either Soba (Noodle) or Soy Sauce. Please comment below any ideas you have!!!!”

The post also shared a close up of the puppies cute little faces!

Followers and fans took over the comments with suggestions like “Mochi for the girl and boba for the boy.” Keeping up the theme.

Another comment recommended, “Salt and pepper!!” Just to branch out.

Sushi was welcomed into the family two years ago in 2017. According to People, the dog is going to help teach North about responsibility.

“North has been asking for a puppy for a long time,” a source told People. “Kim thought it was a good idea for North to take care of a puppy. It could prepare her for baby sibling too.”

Dogs Aren’t The Only Pets In The West Household

When they adopted Sushi, Kim and Kanye West, her husband, were about to welcome another member into their family. Their third child, Chicago was about to enter the world via surrogate. Chicago is now a 1-year-old.

Among North and Chicago, the couple also has two sons, Saint who is 3 and a 4-month-old baby, Psalm.

The Kardashian West household isn’t stranger to pets, and not only dogs either.

Many fans of Keeping Up with the Kardashians know of the gift North received from her aunt Khloé Kardashian, a pet hamster.

On the recent season of the E! show, Kim found it was time to teach a difficult lesson and face a rough parenting obstacle. North’s hamster unexpectedly passed away.

“North is gonna be really, really upset. It’s just not fair. How do I go and explain this? What do I do?” Kim said in a confessional.

Kim passed much of the blame onto Khloé since she was the one who gave the hamster to North, without the permission of Kim.

“It’s the first time North has really, really loved an animal more than her dog,” Kim says. “She’s still into it, and I don’t know what to do. It’s just this kind of s— I can’t deal with. This is why you don’t get someone a pet. Don’t ever do this to me again, I literally hate you.”

“Are you gonna get me killed, too?” Khloé, 35, snapped back at her sister.

They decided to go out and buy North a new hamster, which they used to replace the dead one before North returned home from school.

Make sure you don’t miss new episodes of Keeping Up With the Kardashians on Sunday nights on E!.