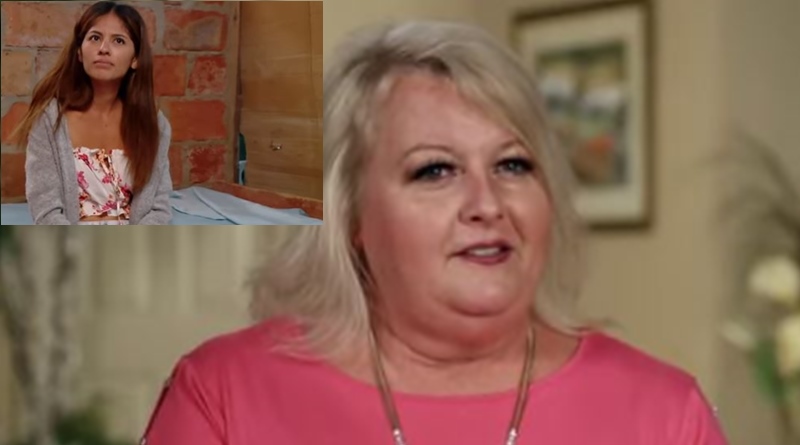 90 Day Fiance: The Other Way just got even more dramatic with Evelin and Laura. Friday night, the two women decided to go live from Ecuador and things got ugly. With sounds of a party in the background, Evelin kicked it off, ranting, and actually told fans/cast members of TLC to “F-off.” Meanwhile, Laura also had her say about “the truth” which consisted of telling fans to watch the Tell-All to find out what happened.

Monsters and Critics reported that Laura appeared to be in Ecuador, on September 19. They reported, “In a very strange turn of events, fellow co-star Laura Jallali appears to be in Equador visiting Evelin. Apparently she needed a break from the stress of the drama that came as a result of the end of her relationship with husband Aladin and her fake pregnancy claims.”

The news outlet shared a video from IG’s @talker_of_shits account. The vid showed Laura’s face so it clearly was her. Now, deciding late Friday to go live, no attempt at hiding faces became evident either. Announcing the Live ahead of time, the @90dayfiancenews account grabbed it and reshared. So, 90 Day Fiance fans and cast members now know exactly what Evelin thinks of them. But, they cut some of it short. That’s because a great deal of it consisted of Laura showing us around the hotel where she’s staying.

Fans of 90 Day Fiance as well as other cast members who felt disgusted with the rave from Ecuador got told to “F-off” by Evelin. You see, some castmembers also came out against Laura. That came after her fake news about pregnancy and being happily married to Aladin. In her rather unedifying rant, Evelin said a lot. She slurred, shouted, and in places came over almost inaudible. But we get it, as she said, “Anyone going for Laura, you don’t know sh*t. You don’t know anything.”

Yelling over the background noise of other people in the establishment, she continued. She also said that we know nothing about her either. Then she said, “For the cast members who went crazy on her [Laura], like for real, we are all in this sh*t together, so we know how it is.” She added, “For those women who won’t stay together, [Laura] is amazing and beautiful, so f*ck off.” After that, Laura came into view, looking a bit uncertain, to be honest. She said that she wanted to “thank those people so much who have been by [her] side.”

Wait for the Tell-All says, Laura

Laura then assured 90 Day Fiance fans that if they wait for the Tell-All, they will enjoy it very much, and all will be revealed. With Evelin yelling in the background, Laura added, “trust me.” It seems like an unfortunate choice of words, perhaps. “Then she added we will “totally know what’s going on.”

And, there ended the rather non-revealing rant where Evelin and Laura decided to go live from what sounded like a party in Ecuador. Wow, so Evelin pretty much  told fans and the cast of the TLC show to “F-off.” Hopefully, Corey Rathgeber, who seems reasonably pleasant, never witnessed it all. What did you think about the rant? Sound off your thoughts in the comments below.

‘Welcome To Plathville’ Preview: Max Calls Moriah Out On Her Risqué Clothing
‘I Am Jazz’ Season 7 Premiere Date Confirmed By TLC
‘BIP’ Brendan Morais Responds To Alleged NordicTrack Firing
‘Bachelor In Paradise’ Cast Evacuated Due To A Tropical Storm
Jim Bob Duggar Predicts Insane Number Of Grandchildren He Could Have