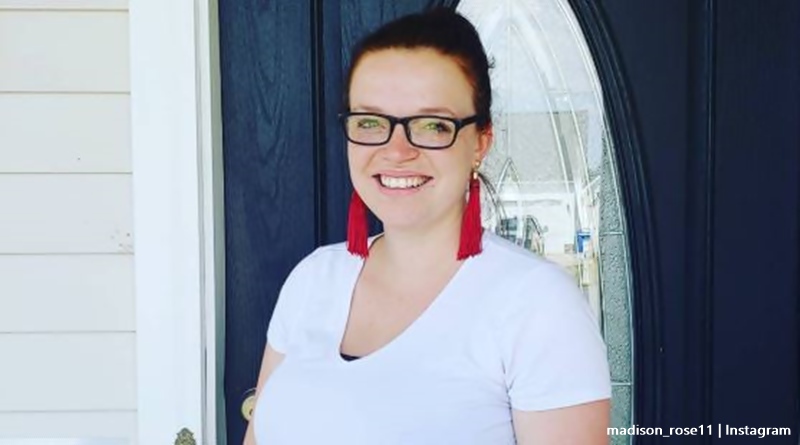 Sister Wives fans heard that Maddie Brown Brush and Caleb welcomed their new baby girl into the world in late August. Since then she shared a few pictures of baby Evie K, and she’s a pretty little child. But, on her one-month-old birthday, Maddie shared the first pic of her in proper, cute little dress.

Maddie Brown dressed baby Evie up for a lovely photo, and she looks very cute. Born in August, People released all the details. After that, we saw her in her little onesie, and of course, blanket-wrapped at times. So, this one-month-old outfit really looks different on her. On her IG, Maddie Brush captioned the photo with, “I hope I raise her to think she breathes fire! 🖤” Actually, right now, the cute kid just looks too adorable, and not anywhere near breathing fire. But fans loved that comment.

Half-sister Mariah commented, “I don’t think you could [do] it any other way💛.” Meanwhile, Aspyn Brown Thompson assured Maddie that she would. Even Kody Brown, who stays extremely quiet on social media right now, loved the picture of his new granddaughter. Other Sister Wives followers chipped in the thoughts about the little girl. One said, “She is precious 🌹 with parents like you two she will be raised to know she can do anything ❤️ y’all are amazing.”

Other fans noted that Evie K looks a lot like Maddie. Yet more noted the very strong Brown genes in the family. @heart_of_texas1 noted, “She’s her mama’s twin! 💕💟🔥🔥🔥.” Plus, @cherimills1 said, “She looks so much like you! Absolutely adorable! I’m sure she’ll be a strong, powerful woman considering that she’s surrounded by that.” @dennalaffer also picked up n the likeness between momma and daughter, writing, “She really looks like you in this picture😊.”

Of course, many Sister Wives fans noticed that a bit like Jinger Vuolo, from Counting On, Maddie placed a headband and a big bow on her daughter’s head. These bows seem to be making something of a comeback these days, and fans wanted to know where they could get one just like it. The tiny little dress also drew a lot of compliments. Fans love the white with red flowers and yellowish ones that match the color of the bow. They also noted how the white dress enhances those stunning blue eyes!

I hope I raise her to think she breathes fire! 🖤

What do you think of the gorgeous pic of baby Evie K in a proper little dress at one-month-old? Do you think this cute little girl of Maddie Brown Brush will grow up breathing fire? Sound off your thoughts in the comments below.