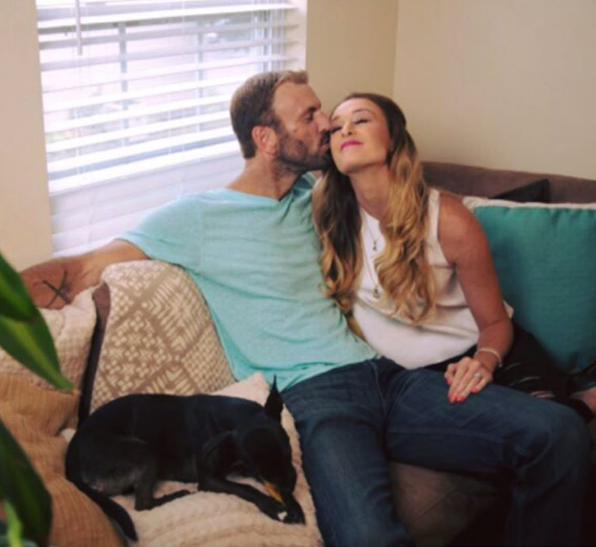 With decision day and the reunion special done, it was time for the tested pairs of Couples Couch to add in their two cents and sassy commentary on Season 9 of Married at First Sight on Thursday night, September 19.  Anthony D’Amico and Ashley Petta, Jamie Otis and Doug Hehner, Bobby Dodd and Danielle Bergman, and Kristine Killingsworth and Keith Dewar cozied up between the pillows and had plenty to say about this week’s status update on the four couples daring enough to leap for the sake of love into this season’s Married at First Sight.  The season-ender for the follow-up show was the liveliest and most laughable Couples Couch ever.

Not short on words on Couples Couch

Couples Couch got off to a sluggish start weeks ago because none of the veteran couples really opened up and spoke their mind.   That certainly wasn’t the case in this summation for the Married at First Sight season.  Like the other three couples in this year’s is arranged marriage drama, the seasoned couples were sad to see that Iris and Keith didn’t find a way to stay together.  It’s possible that off-camera issues played a part in the outcome.  Like Elizabeth Bice, many spouses expressed hope that they would be led to one another at a later time. Still, that didn’t stop some playful teasing.

Doug Hehner stood firm in saying that Iris had plenty of time to confront both the maturity and relationship issues, defending that it was not all up to Keith Manley.  Hehner and Anthony D’Amico provided a hilarious display of Iris talking in the third person, as is Iris’ way, but never with mean intent.

The favorite couple, Greg and Deonna, really let Bobby Dodd down.  He was sure that they had an announcement of Deonna’s pregnancy, and was disappointed when their news involved becoming an aunt and uncle.  None of the veterans thought that these lovebirds would wait two years before adding to their nest.

There was unanimous doubt about any defense by Matt Gwynne, but lots of support for Amber Bowles.  Danielle Bergman is still cheering for a relationship with Raven, but Bobby cautioned that “there’s a reason he’s never been that guy for her.” Many a great friendship has been tainted by romantic effort.

The loudest jeers came when Matt admitted that he knew in “15 minutes” that the relationship with Amber wouldn’t work.  Everyone decried why he couldn’t at least be man enough or the “friend” he always claimed he was and tell Amber the truth.  Regardless of his claims of never becoming intimate with anyone outside their marriage during the experiment, no one bought a word.   The Couples Couch guys did interpretive imitations of Gwynne’s body language.  Anthony offered that “Amber looks great.” Jamie interjected that instead of giving the marriage “more time to grow,” as Matt claimed he was doing, he could have given love, loyalty, and respect a try.

Matt visibly recoiled when Amber gave the advice to “have the difficult conversations.” Kristine Killingsworth asked “Can I strangle him for you?” from her living room.  Keith’s remarks were edited by the censors.

You go, Amber! Self-love is the best love. ❤ #MarriedAtFirstSight pic.twitter.com/GLsHY8U3Af

Predictions were split on the fiery partnership between Elizabeth and Jamie.  Two of the Couples Couch spouses predicted they were not together, while the other two and their cohorts in this Married at First Sight installment celebrated that they stuck it out, and are on the journey of learning to love and live life together.

There was a lot of commentary over Elizabeth’s short Japanese-style brocade dress.  Some of the husbands critiqued that she looked like “a geisha.”  That probably would be fine with Beth and her husband.  She has always flaunted her own unique style.  Bobby Dodd moved close to the screen to get a good look at her hair color, not thinking it was red anymore.  It seemed to be just a darker shade.

Bobby playfully remarked about “OVER-talking” the word “communication” as emphasized by the new brides.  He and Anthony were dismayed again when Elizabeth and Jamie did not announce a pregnancy.  It’s a strikeout on that score. He also suggested that they limit their new furniture in California.

Jamie and Doug compared their move to New Jersey “across the George Washington Bridge” to the Thompson couple’s imminent move to California.  Danielle supported the newlyweds’ being on their own, while Bobby still feels “it won’t last.”  This Married at First Sight pair has always had their own playbook, and like the other couples, they deserve well-wishers.

No one knows if Couples Couch will be around to quip about the couples from Washington DC in January’s Season 10 of Married at First Sight, but they closed this season with a buzz before heading to bed.