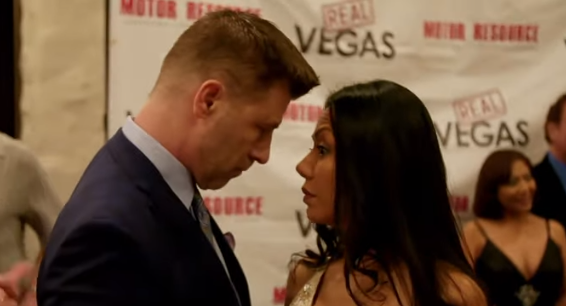 Gentille Chhun and her fiance Brian appeared to be getting ready to get married on the season finale of Marrying Millions. The Las Vegas real estate investor and construction working have been through many obstacles in their time together. They seemed ready for the alter, until hours before Gentille got cold feet and called the wedding off. But not only was it the ceremony, she called off the relationship entirely. So that brings up the question, was it ever real to begin with?

Any reality show is going to have at least some scripted material and faked content to it. But, in this case, there is a lot of evidence suggesting the majority of Brian and Gentille’s story together was fake.

According to Starcasm, Brian is an actor, he has 62 credits on IMDB. The source reported an article that goes into detail about his acting history. This evidence isn’t as bad as it comes off, his acting history consists mostly of extra roles and bit parts. It did make it clear that he loves being on television, though.

Gentille has also had numerous TV appearances on Las Vegas real estate shows, she also had her own talk show, The G Spot With Gentille. Their need for on-screen attention isn’t a definite indication that their romance was faked for Marrying Millions, but it seems to be a move in that direction.

Gentille was recently interviewed by Instagrammer @TheRealistReality. It was recently revealed by Gentille that Brian was the one who applied for them to be on the show, he came across a casting call.

Reposting The Realist Reality interview. These are my real thoughts and words. I do wish they would have just used a solo photo of me for the cover photo though. #marryingmillions #gentillechhun #gentille

Gentille re-posted the interview onto her page. The comment section of the post was quite interesting, to say the least. It appears that a profile under the handle of @stacy12349 had a lot to say about Brian, especially for a profile with no posts, no followers, and isn’t following anyone.

One follower commented, “Oh and seeing how he didn’t come out about a lot of things until you two were on the show, did he ever lead you to believe that he was more wealthy or living on his own?”  “Stacy” replied back that Brian didn’t live with his parents his whole life. He only stayed with them while he was in the process of moving to another state. He only stayed because he and Gentille were cast for the show.

Gentille had another interaction with this same account on the post of the interview on @TheRealistReality’s page. A commenter recognized Brian from the show Axe Men, and questioned if it was him. “Stacy” came to back Brian up, saying he has been in a few movies and shows. To this, a commenter replied, “Perhaps proving that reality shows are fake?” So, “Stacy” closed out the conversation with, “Exactly!” If this really was Brian, would he be saying that the show was fake all along?

How Could The Marriage Be Real Without A Marriage License?

A reporter at Starcasm checked the Clark County, Nevada court records there is no marriage license for Gentille and Brian. For a couple who was supposedly just hours from walking down the aisle, a marriage license is an important part. Not only is it important, but it’s also required prior to the ceremony. From this, it seems as though the chapel scene was completely staged, even if guests didn’t know it.

The reporter also checked the Clark County records for the properties that Gentille owns, the records showed she owns two properties in Clark County. Her personal residence that is listed on all the documentation is one of those properties. It’s a nice home, in a gated community in south Las Vegas. Believe it or not, photos of this home do not match the pictures of Gentille’s home featured on the show. Gentille even hosted a Marrying Millions season finale viewing at her home. Photos from the event match with her personal residence, not the house from the show.

Right now, there’s no surefire answer to whether or not the relationship was fake. There is definitely a lot of evidence pointing to yes, but answers are to come eventually.

So far, there is no news on if Marrying Millions will return for another season or not.