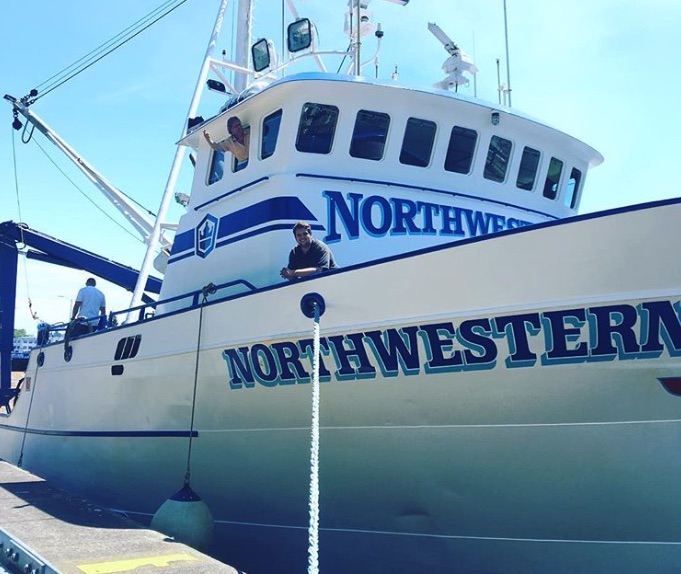 On Monday, Deadliest Catch star Nick Tokman spoke about his time on the Northwestern and the hit Discovery show. What did the reality star named Sunshine have to say about his three years working on a crab boat under Captain Sig Hansen? Moreover, why did Sunshine decide to leave crab fishing in the Bering Sea?

Journey To The Deadliest Catch

Former Deadliest Catch star Nick Tokman had a life story to tell kids at a Staples, Minnesota auditorium, and this was no ordinary fish tale. The former Northwestern deckhand nicknamed “Sunshine” shared his personal journey to the high school students. He revealed that he went from not feeling accepted to personal fulfillment. What is his advise?

According to the Brainerd Dispatch, Sunshine shared that he used to fight to “get the approval of others.” It took the 31-year old former reality star a few years to have the “courage” to be who he was and be happy with the man in the mirror.

After eight years of crab fishing and lots of reflection, he learned you must be “true to yourself.” He has a lot of wisdom beyond his 31 years. “Tune out the outside voices and tune into your voice.” Tokman advises. He then used a metaphor that Deadliest Catch fans can certainly relate to.

“The question I have for you is, are you the captain or is it the others around you? I’m here to remind you to listen to your voice so you are your own captain.”

Headed For The Bering Sea

Tokman is from the other side of the country, West Springfield, Massachusetts. There is a “huge” opioid crisis there and a lot of his friends were in a heap of trouble. Determined he wanted better for himself, he enrolled in college. But, between school and working three jobs, he suffered serious burnout. He decided to try something very different and head out to a place where others have chased their dreams: Alaska.

First, Nick decided he was off for the Bering Sea, with only a backpack. Next, he determined to seek out employment in the most dangerous job in the world. Most of all, he wanted to become a crab fisherman, just like the ones he saw on the Discovery show. Although his grandpa introduced him to the show, his folks were not happy about his decision to fish crab. He almost didn’t go.

“I was trying to find a job in the deadliest profession. … My parents said they wouldn’t fund me if I went. I began thinking and thought my family is right, it is not worth it.”

One of his friends reminded him that he could die in a car crash just as easily as on the Bering Sea. This was all he needed to book that ticket and head to Alaska.

Although Sunshine had organized an airport pickup in Alaska, no one showed. He later learned that nearly all people who say they are going to Alaska never go. This was a tough period of time. He was homeless and lived in tents and couch surfed. Every morning, he was up early and at the docks. He got one job but was fired. Even though he was looking for work no one was hiring. Could things get worse? Unfortunately, yes. Tokman even wound up in the hospital with a serious staff infection.

Yet, Tokman persisted. He slept on the floor of an apartment complex and went to the library to print his resume. Next, Nick put them into Bering Sea-secure plastic bags and “put one on every single boat.” He got a bite! He made $2,600 and it changed everything. The successful crabber revealed that this is why you should “never give up.”

Nick said that working on a commercial fishing boat was the toughest job he ever worked. He fell on the boat and he just collapsed “bawling.” He had to go back to Massachusetts. Serendipitously, he met “a man with a heart of gold.” This man wisely told him, “You may face failure in your life, but it won’t kill or break you. It’s what you do afterward.” He flew home, went back to school, then went back to Alaska. He was determined to make it work.

When Nick returned, he was determined to go crab fishing. He got a job on a fishing boat. Then he met Captain Sig. Sig offered him a job, but Nick was conflicted. He felt he “owed” it to his current boss to stay loyal. But, when he poured water into the fuel tank, Nick found himself unemployed again and he sought out the Northwestern captain. His luck changed. A Northwestern deck hand got injured on the first trip out, so Nick got the job.

He worked on the Northwestern, and starred on the Deadliest Catch Seasons 9-12, from 2013-2016. It doesn’t sound like he made any of his previous mistakes! This is when he got his nickname Sunshine. It was because he was smiling all of the time. That smile and his story of struggle and success has taken him on a new career path. He is now an inspirational speaker. Everyone has seen the reality show, and have an idea of the dangers and toil of the Bering Sea. He learned from his lessons in Alaska. Nick Tokman is now making a difference and helping others follow their own path.

Do you remember Nick “Sunshine” Tokman from the Northwestern? Have you been following his story? Share your comments and be sure to check back with TV Shows Ace for the latest Deadliest Catch news. Deadliest Catch just completed airing Season 15 on Discovery. Fans are still waiting for the official word on Season 16.