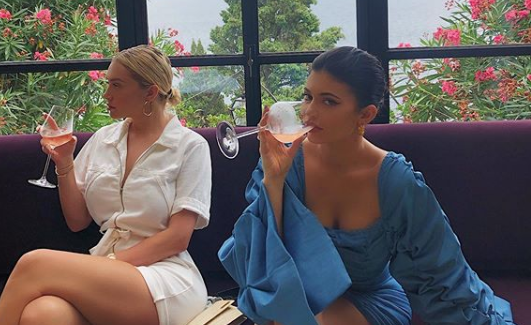 Kylie Jenner had her fans freaking out with a confusing post on her Instagram. They flooded her account asking her if she broke up with Stormi’s father, Travis Scott. According to E News, the rumors were going crazy because not only did the picture set them off, but the caption.

Kylie stood in her closet and a picture that used to be in it of her and Travis was MIA. Of course, eagle-eyed fans noticed. It didn’t help that the caption Jenner chose, “ain’t a game boy.” Next her friend Yris Palmer responded, “made for one player.” Of course, fans thought something had happened.

It did seem sudden since the couple just posed for Playboy together. In the magazine, they talked about their sex life. Since it just hit the news, it seems like a break up would be out of left field. In the interview where Travis asked Kylie questions, they confirmed their bedroom time is still hot.

“A lot of people claim that having a baby can hurt your s*x life, but I feel like that’s the opposite of our experience,” the rapper told Jenner.

“Yeah, I feel like we’ve definitely proven that rumor to be wrong,” Kylie Jenner replied. The couple doesn’t seem to mind sharing the details.

There Seems To Be Nothing To Worry About

Fans compared a shot she took in the same place when the picture was present. They blew her feed up trying to figure out what was going on.

Kylie Jenner posted another picture later and fans breathed a sigh of relief. The couple was at the zoo with Stormi. They were all having a fun family day and in her Instagram story, she shares some of Stormi’s artwork. It’s possible Jenner knew taking the picture out would get more attention on the photo. Perhaps, she’s learned from her famous sisters over the years, or perhaps she’s just figured it out on her own.

In the Playboy article according to Elle, Jenner said she knew early on they worked as a couple because they have good chemistry and are best friends. In an interview, Travis was conducting she said, “we think the same and we have the same goals and passions in life.” Looks like they’re in it for the long haul, until the next suspicious Instagram photo.

Don’t miss new episodes of Keeping Up With the Kardashians on Sunday nights on E!.