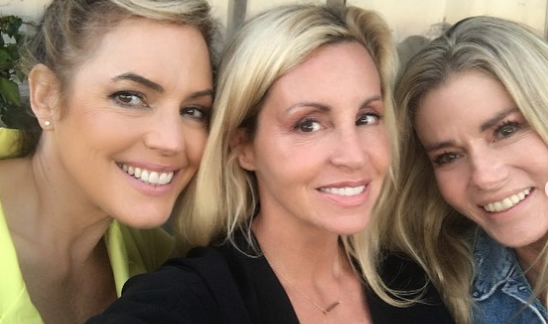 Speculation has ran wild since it was announced Camille Grammer would not be back on RHOBH. Now fans have a new reason they suspect she wasn’t asked back for the new season.

According to the Cheat Sheet Camille Grammer originally believed she wasn’t asked back because of Kyle Richards. She even said it was her show. Now fans wonder if the reason. She’s gone is because of her comments about Kavanaugh.

During RHOBH Camille Grammer backed Kavanaugh. The speculation has seemingly been brought back to the surface because of Eileen Davidson’s recent interview on Watch What Happens Live with Andy Cohen.

When asked if Camille played both sides of Puppy Gate. Davidson didn’t exactly answer the question. The day after fans were all over Camille’s feed. One fan brought up Brett Kavanaugh and all the Twitter users jumped on that. They decided maybe the reason Camille wasn’t on the show, was political in nature.

His nomination was brought up and Lisa Rinna was against it. Camille defended him saying she knew what it was like to be falsely accused. This caused a huge rift between the two as Lisa disagreed with her strongly.

I rode 20 miles on my mountain bike with my husband yesterday. He’s a Triathlete and ex Ironman. My new hobby. Trying to stay fit at 51. 🚴‍♀️🚴‍♂️

What Does Camille Think About Andy Asking If She Talks Out Of Both Sides Of Her Mouth?

Camille Grammer responded to the speculation.  She said, “I still don’t why Andy is forcing this two-faced narrative on me. I told Teddi to her face what I said to Dennis. What the heck? I gotta laugh, I was asked to tell Dennis what happened after the Boy George concert, so I explained.” This was another instance of Camille being accused of talking out of both sides.

She said this because Andy was the one asking if Camille Grammer played both sides when talking to Davidson. Andy also made a point to confirm Davidson and Camille were buddies when she didn’t want to agree with him. Fans replied Andy had his own agenda. They think he’s liberally biased when it comes to who he’ll put on the network.

A fan felt Grammer represented a lot of people who supported Kavanaugh and believed Blasey Ford was lying.  The fan said she was brave and the other women came off like, “robots repeating media talking points.” Camille’s true fans were proud of her for standing her ground.

Camille Grammer said, “it’s sad that we can’t have different viewpoints.” Truthfully fans may never know all the reasons Camille is gone. It doesn’t look like she is coming back, though.