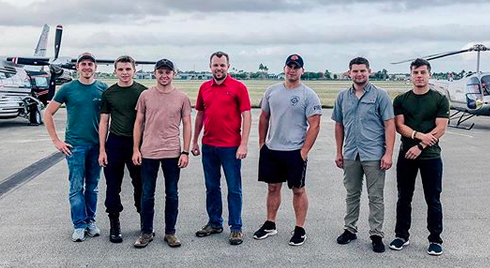 In early September, the Duggar family shared that some of their older children were headed to the Bahamas. Their goal was to help with disaster relief after the recent hurricane tore through the Bahamas. In addition, a couple of the Bates children joined them.

Those on the trip included John, Jana, Jason, James, and Austin Forsyth, who is Joy-Anna’s husband. Since they initially left for the trip, Austin has returned. Lawson and Nathan Bates are also helping out there.

When the kids left for the trip, the Duggar family shared a post on social media. They wrote, “John, Jana, Jason, and James took off early this morning with a medical and disaster relief team to the Bahamas to help after the massive devastation from #HurricaneDorian . They’re now on the ground! Please keep the team and all who’ve been affected by this horrific storm in your prayers!”

Now, it looks like Abbie, John’s wife, is on the trip. Abbie is a registered nurse. After a recent Instagram post revealing that she had joined the group in the Bahamas, Duggar fans became concerned. In the comments of the post, fans expressed that they are worried because Abbie is currently pregnant.

We were privileged to serve with @mediccorps and many other great teams to help with disaster relief in the Bahamas. The devastation from hurricane Dorian is overwhelming! Please continue to pray for our team working on the ground and for the people of the Bahamas as they look to the future. ❤️🇧🇸 #mediccorps

On Wednesday, the family’s Instagram revealed that Jason is home from the Bahamas. They shared a few pictures of Jason in a social media post. They also wrote a message and said, “Grateful that Jason made it safely home, and so glad he was able to use his skills as a licensed contractor to serve the people of the Bahamas!! We continue to pray for some of our other children who are still helping there today, and for all those affected by this disaster!! Our hearts are with you!”

Grateful that Jason made it safely home, and so glad he was able to use his skills as a licensed contractor to serve the people of the Bahamas!! We continue to pray for some of our other children who are still helping there today, and for all those affected by this disaster!! ❤️🇧🇸 Our hearts are with you!

It’s unclear why exactly Jason returned to Arkansas before the rest of the Duggar children did. If something was wrong, the family likely would have revealed that information. So far, fans of 19 Kids & Counting and Counting On seem to be grateful for the work the Duggars and Bates are doing. Lawson Bates commented on the post and wrote, “You were a great asset to the team, Jason! Thanks for making a difference”. It sounds like Jason was a great help in the Bahamas.

What do you think about the kids helping out in the Bahamas? Do you like the family’s updates about the disaster relief efforts? Leave a comment below!

Some of the Duggar family members will appear on Counting On soon. It is set to premiere on TLC this fall.