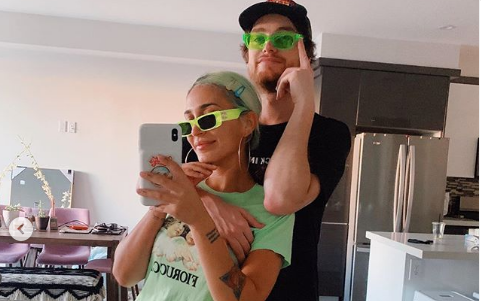 Kylie Jenner always looks amazing in her photos and lately she’s been killing it. Her birthday tour produced some of her best Instagram photos to date. Jenner had help in that department because Amber Asaly was there to document it all. The twenty-six-year-old photographer went on Kylie’s lavish vacation with her and chilled on her yacht for three months with her.

In an interview with Cosmo she let fans in a little bit on what that was like. The professional photographer didn’t mince words. Amber said, “this summer has been f*****g amazing.” She said Kylie Jenner invited her along on the ‘Kylie Skin’ trip as a friend but she also acted as a photographer. She said, “when I’m in a beautiful location with beautiful people and I happen to have dope cameras. I’m gonna do my thing no matter what.”

im not a regular grandpa…im a coooool grandpa 😎

She wanted to make it clear she does not work for Kylie Jenner. The two have been friends for a while and have run in the same circles for a while longer than that. It was at the Turks and Caicos vacation they were on in mid-July when Kylie’s photos suddenly seemed a bit more elevated. When it came time for Kylie’s birthday tour, of course, she invited the one who’d made her Instagram go up a level.

Amber Asaly said paparazzi kept them from any true photoshoots so they just shot whenever the lighting was good. That’s most likely why lots of fans speculated Kylie staged her photos on vacation, she probably just always appeared camera ready for Amber.

Amber had already established herself online before she starting hanging out with Kylie and company. She has shot for Converse and Puma, as well as launched her own imprint. Kylie’s Instagram will make her more well-known but she already was doing pretty good.

What Did The Photographer Say About Mama Kris On The Birthday Tour?

Amber Asaly said Kris Jenner was, “such a queen.” She said since she’d been to Italy so much, she took them everywhere and showed them around. Kris acted like a tour guide and Amber seemed to be glad she was there even though the momager had to beg to come according to some sources. Fans will be watching to see what epic shots Kylie puts up next.