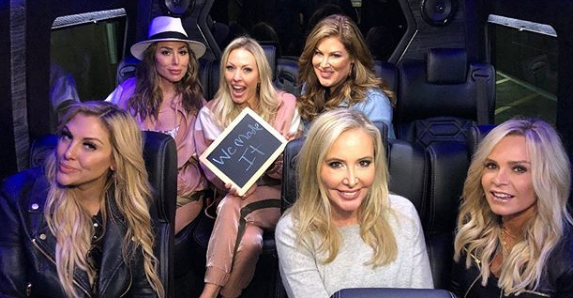 The Real Housewives of Orange County often fight, but it’s very rarely things get physical. On tonight’s episode Shannon Beador took herself to the ER after she worried Kelly Dodd might have injured her. According to People, Shannon started thinking something really might be wrong.

The housewives took a trip to Miraval Arizona Resort. The other wives; Braunwyn Windham-Burke, Gina Kirschenheiter, Emily Simpson, and Tamra Judge were there as well.

End of summer bash didn’t disappoint. 🎉❤️ Always a great time when the cops show up…😳

What Happened That Shannon Beador Went To The ER?

Shannon Beador stood in a large bowl with another bowl perched on her head. The staff at the spa moved around her to clear her energy field. Kelly snuck up and hit her in the back of the head with a mallet. The bowl covered her eyes so she didn’t see who did it. After the fact when she found out who did it, she told her now she had a headache. The strike really hurt her while Kelly was just having a little fun.

Kelly didn’t believe that she’d hit her that hard. She told her to hit her with it and see if it hurt. She didn’t take Shannon seriously at all.

Tamra Judge told Beador later, while she didn’t want to scare her, her ex-husband hit his head and his spinal fluid started to leak. She said, she told him he was fine and he ended up in the hospital. She told her go get it checked out just in case. Tamra later said she knows Shannon overreacts, but the best way to move forward was for her to just go get it checked so she felt better.

“Now I’m a little scared,” Shannon Beador said. “It hurts so bad here right now. I have a little bump. My left eye is blurry. I’m a little bit freaked out about it.” She decided she’d feel safer if she went and got it checked out.

Meanwhile, Kelly still didn’t think it was a big deal. She said, “I know, I’m strong. I was just trying to put a little ring in the ding. She’s full of crap.” At the end of the episode fans were left with a cliffhanger not knowing if Shannon Beador had a head injury or not. The hospital staff told her she could charge Kelly with assault, so that will be interesting on next week’s episode.