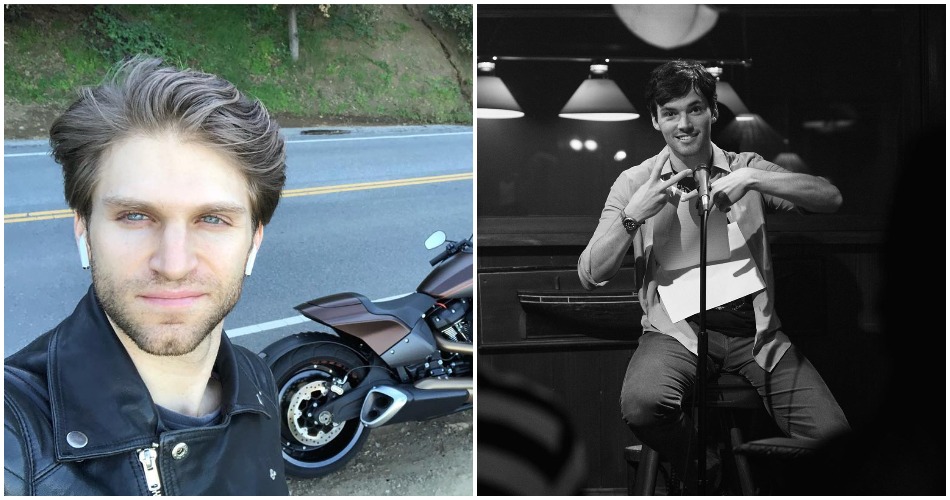 The week started off a little spicy for Pretty Little Liars fans as Keegan Allen shared a very revealing snapshot of himself and Ian Harding.

The sexy photo featured the former co-stars showing off a delicious amount of muscular skin as they proudly put their birthday suits on display.

According to the caption of Keegan’s Instagram post, the photo was his way of wishing Ian Harding a happy birthday with a dash of humor. As Pretty Little Liars fans know, Ian (who played the role of Ezra Fitz) turned 33-years-old on Monday.

In the caption, Keegan (who played the role of Toby Cavanaugh in Pretty Little Liars) joked that he purchased the steamy snapshot from eBay. The photo contained “EBAY” in watermark form plastered all over it.

Rocking nothing but a pair of shoes, the two actors stood proud as they used large square pillows to hide their goods from the camera.

Ian was notably more confident in the snapshot as he had a huge smile across his face while Allen looked as if he didn’t want to be there.

In the comments of the photo, fans also quickly noticed something. They noticed that Ian seemed to have significantly more trust in Keegan than vice versa.

The picture features Ian holding up Keegan’s pillow and Keegan holding up Ian’s. Keegan, however, clearly has his other hand also holding up his own pillow. Ian, on the other hand, has his hand dangling beside him. He trusted his former co-star to keep the pillow in place.

With a massive following of 6.5 million, it is no surprise fans loved the photo. The photo was posted a little over 12 hours. In that time, Keegan’s followers showered it with just shy of 200,000 likes. And, nearly 800 comments.

A few comments quickly soaring to the top jesting that they wanted a follow-up post without the pillows.

Adding to the humor, several of the actor’s followers jokingly wanted to know how much the photo cost. One added that they were “asking for a friend.”

Echoing the joke above, some questioned how much it would cost for a photo that lacked the pesky pillows.

Most were distracted by the generous helping of chiseled skin. There were, however, several birthday wishes for Ian in between the reaction comments.

The official Instagram for eBay even dropped in and wished Ian a happy birthday before adding: “Great to see that Keegan isn’t gifting anyone black hoodies.”

Their Pretty Little Liars co-star Tyler Blackburn (who played Caleb Rivers) was one of the 190,000 likes on the photo. It did not appear as if Ian Harding has yet to react.

What do you think of Keegan’s birthday present for his co-star? Sound off in the comments down below.

‘Days Of Our Lives’ Week Of June 21 Spoilers: Brady Busts Nicole – Dr. Snyder Dead?
Khloe Kardashian Facing Backlash As Fans Accuse Her Of ‘Blackfishing’
Justin McSwain Says He’s Thankful For A Year Of Life – Interesting Photo
Zach And Whitney Bates Bring Home Baby Jadon [See Homecoming Pics]
What Does Jacob Roloff Do For A Living & Does He Still Live In A Van?