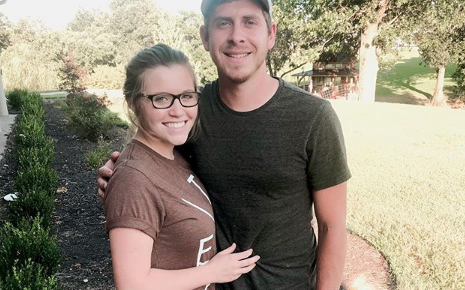 Joy-Anna Duggar and her husband Austin Forsyth have lots of followers on their Instagram account. As with most reality TV stars people watch everything they do closely. With the show being on for years, some of the middle children that used to not draw the spotlight are getting tons of attention. Joy-Anna posted a picture of her son with her iced coffee which is adorable, but fans instantly were shook at the thought of little Gideon having caffeine.

Joy-Anna and Austin Forsyth flip houses to make extra cash and do pretty well according to Cheat Sheet. Gideon is a year old and the couple had wanted to have another but Joy-Anna recently suffered a miscarriage at just a little over four months along. Their fans have been incredibly supportive of their loss. That doesn’t stop some from dragging her choices with her toddler a little on social media.

Joy-Anna Duggar shared a post on Instagram of Gideon with her iced coffee. She captioned it cheekily, “A little coffee to get him through the day. Or maybe not… he already has more energy than I can keep up with.”

Fans thought the shot was cute, but not cool. One fan said, “he is too young for coffee.”  Some were more than supportive with one saying, “I’ve drank coffee since I was born and I’m fine.” Another fan said most likely he grabbed the cup and she snapped a picture before taking it away from him. That’s the most likely scenario but she didn’t think twice before posting it because it was just cute.

A little coffee to get him through the day. ☕️ Or maybe not… he already has more energy than I can keep up with.🤪🙅🏼‍♀️ . #nocoffeeforhim #somuchenergy #GideonMartynForsyth

Joy-Anna Duggar reminded fans of another Duggar and her toddler’s drinking habits. One fan commented, “Oh dear, Jessa must have been a bad example with her boys drinking habits, lol. Just kidding. No mom shaming.” They were referring to the time Jessa captioned her son drinking sparkling water, which was not soda, and said, “wow, definitely not Fanta.”

Fans went after her saying; please tell us you don’t give him Fanta. Jessa responded, “no, he prefers coffee and energy drinks. And of course, I’m joking. He only drinks breast milk and water.”

Joy-Anna Duggar has chosen to just not respond to anyone commenting about him taking a sip of her coffee. With the history of people mom-shaming the Duggar girls, that’s probably the best move.