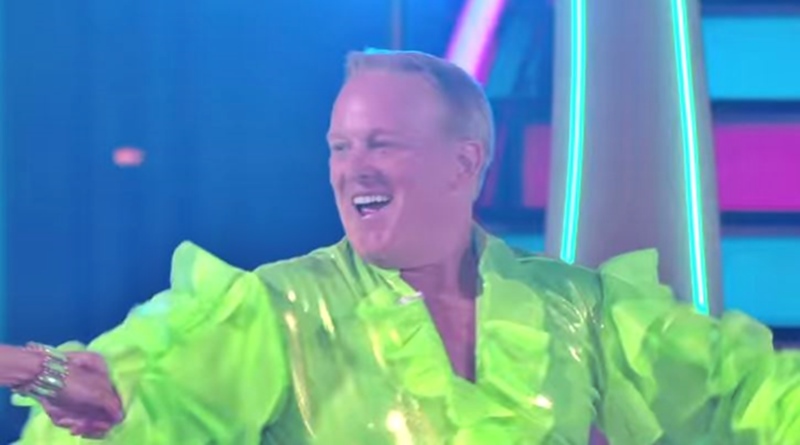 DWTS new season brings Sean Spicer to the show. He wore a ridiculous costume and somehow scraped through to second-last place. TV Shows Ace reported that Lamar Odom managed one of the lowest scores in the history of the series. Even Sean managed better than him. But, Sean admits his odd costume took him a bit by surprise. Well, fans of the show weren’t that surprised and loads of savage memes and comments came his way on Twitter. In fact, one fan suggested, “if sean spicer gotta be on #dwts at least the costume designers are fighting back.”

When the show announced their lineup in the cast this year, thousands of viewers expressed their less-than-keen ideas on the inclusion of Sean. The politician’s time as a former White House spokesman never endeared him to any non-Republicans who don’t favor Donald Trump as president. But, he seemed oblivious to all the negativity. EWS reported that after his alarming debut in an odd lime green costume, he seems unfazed by hate reactions.

The news outlet reported that he said to reporters, “if people can tune in and look at this diverse cast, [look at how] they are rooting for each other, how they are having a blast with each other for two hours, we can put every policy and politics aside. Rooting for different people, having fun, relax, then that’s what we should have more of.” However, he admitted that the costume seemed a bit odd and it’s the first time he ever tried it out. Well, DWTS fans literally dragged him under for it with some savage reactions.

Savage reactions from fans on Twitter aimed at Spicer’s politics

While it seems Sean Spicer expected some trolling, and he certainly seems unphased by it, viewers get down to some savage comments. Some of them, as expected, refer to his political past, while others focus on the ridiculous lime green costume. Here are a  few comments about the unpopular politician:

We can’t wait to see how flexible Sean Spicer is on Dancing with the Stars since he had his spine removed years ago. #DWTS

Memes and comment on the odd lime green costume

Some of the memes and comments about Sean Spicer and his odd lime green costumes were a lot funnier than serious sniping at the politics he represents. These include, “I can’t imagine the excitement whichever wardrobe person at #DWTS who voted for Hilary felt when they found out they were in charge of @seanspicer’s costume.” Meanwhile, @SeanTCahill shared, “Sean Spicer…on #DWTS ?? Everyday I’m leaning more toward believing the world did end in 2012 and this is all a Black Mirror episode that won’t end.”

It seems between the time I left work and arrived home to check Twitter someone slipped me some serious hallucinogens 🤯 #SeanSpicer #DWTS https://t.co/oASqwyLOQC

Here’s another one that got followers of DWTS giggling:

Sean Spicer makes his Dancing With The Stars debut.#DWTS pic.twitter.com/eLiakgnXR6

What did you think of Sean Spicer’s odd lime green costume? Did the many savage political comments and funny memes surprise you? Or do you think this really represents America as a nation that can come together and laugh together over their differences? Sound off your thoughts in the comments below.

Remember to check back with TV Shows Ace often for more news about DWTS 2019.