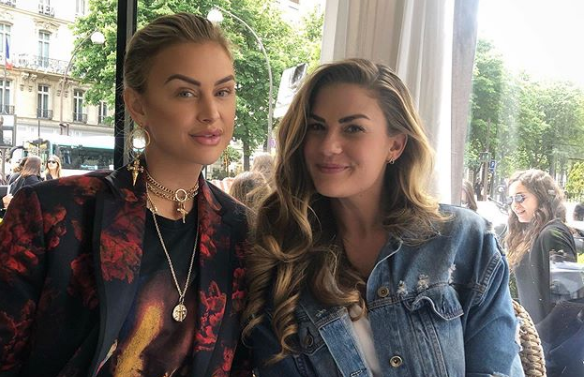 It’s not been that long since Lala Kent reopened the feud with Curtis ’50 Cent’ Jackson. She went on WWHL and said she bruised his ego. Responding to that, he launched a social media slam fest. According to The Blast, now, he’s sharing the reason he’s gone off on Lala and her fiance Randall.  He posted the recording of himself talking to his lawyer and captioned it to let fans know it’s the terms he agreed to when Randall gave him the money.

He posted a picture of Lala Kent this morning with a picture of the doll Annabelle from the Horror movie. 50 captioned Annabelle, “New Lala Kent doll limited edition, drunk puffy face.”

Not to say he isn’t giving each member of the couple equal attention. He posted a picture of Randall next to the guy in Men in Black after the bug puts his body on as a suit.

Not only are those posts there, when you look at his Instagram feed there are three posts of Lala Kent taking shots in a hot tub.  He’s not backing down and now is saying according to the deal with his lawyer, he doesn’t have to.

In the recording you can hear the lawyer go over the provision that was added to the repayment contract. The deal said after the repayment contract if Lala Kent or Randall made any public statements about him, he can respond. Furthermore, he could respond publicly in any manner without restrictions.

He put the blame for this feud starting up again solely on Lala Kent. Cutis says, “here’s the terms I agreed to when Randall gave me my money. I didn’t say anything about him till his little drunk ass girl friend went running her mouth.”

The recording also has 50 telling his lawyer if they tried to sue him for defamation he has all day for it. His lawyer then tells him the comments he made are his opinion and he’s legally okay.

Don’t miss Vanderpump Rules when it returns to Bravo with new episodes.