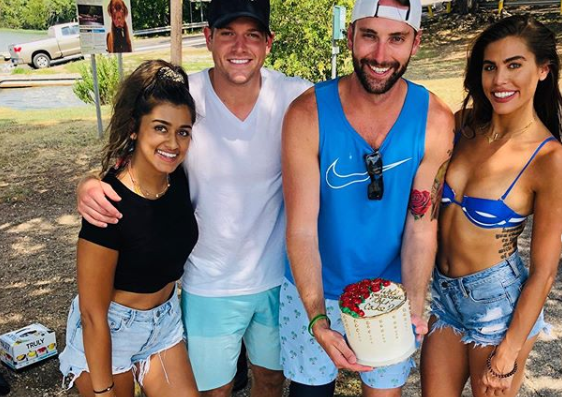 It’s a small world in the reality TV life. Lately, it seems like most everyone is hooking up with each other. Recently fans have thought another couple was starting to get hot and heavy. The two from Bachelor nation, Kirpa Sudick and Cam Avala.

The lady in question Kirpa Sudick was a contestant on Colton Underwood’s season of The Bachelor. The gentleman, Cam Avala was a contestant on Hannah Brown’s Bachelorette season. According to US Weekly, fans thought they’d started dating after sharing love on social media.

Why Did Fans Think Kirpa Sudick And Cam Avala Were An Item?

Kirpa Sudick got rumors going when she posted on Instagram for Avala’s birthday. She captioned the posts, “happy birthday to this gem of a human. So glad you’re in my life @camronayala.” Two of the pictures showed the two reality stars posing in front of graffiti that reads, “I love you so much.” Another is of Cam Ayala with Kirpa Sudick and Alex Blumberg wrapping their legs around him.

It was Ayala’s comment of, “ILYSM,” that had fans paying attention. One fan posted, “wait did I miss something?” Cam included a heart emoji and angel emoji in his response. Fans started posting immediately to both of their social media. One said, “yes Kirpa! So happy for you and Cam! #teamkirpa.” There were so many fans who wanted it to be true saying things like tell me they’re dating.

Unfortunately for those well-wishers, Kirpa responded to let them know she and Cam we’re just best friends. In his own post for his birthday, Cam Ayala shared a picture of himself with a cake and Kirpa, Blumberg, and another Bachelorette co-star Matt Donald. Fans noticed Kirpa was in three of the seven pictures he picked for his birthday post according to Life and Style. One fan said, “I need answers!” Well, those answers are here.

Kirpa Sudick told Us Weekly the pair were just friends. She continued that she’d been so lucky to meet amazing people while she was on The Bachelor. No doubt they’ve sparked rumors fans aren’t just going to let go with a lot of them hoping Cam did find love on Bachelor in Paradise after he was kicked off after all.