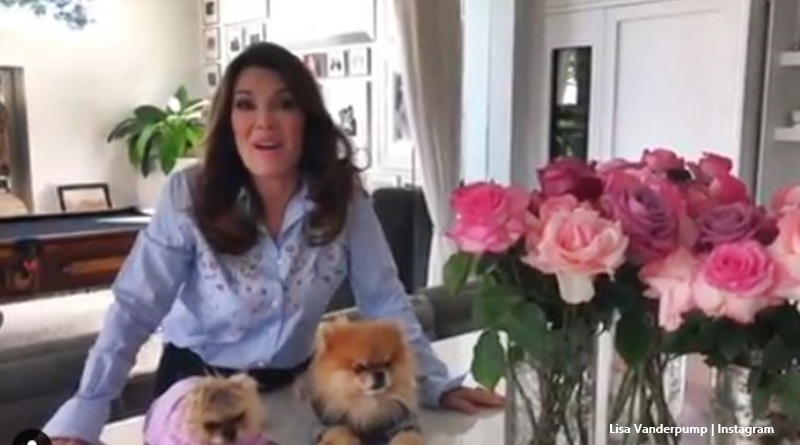 Vanderpump Rules is already filming for a new season and Lisa Vanderpump’s fans know that’s great news. That’s because we won’t see her back on The Real Housewives of Beverly Hills. Lisa opted to step away from the show after a torrid year involving ‘Puppygate.’ Lisa celebrates her birthday on September 15, and she thanked her fans for their best wishes.

“Next year will be better!”

Lisa’s fans who watched her on Bravo’s RHOBH last season saw Kyle Richards storm out of Lisa’s home on her birthday weekend. TV Shows Ace reported how it was a low time for Lisa, who mourned her brother marks’ passing. That’s when Kyle Richards decided to accuse her of lying about leaking the story of Dorit’s dog to Radar Online. It ended badly, and we noted, “According to Lisa’s newest blog post, Kyle accusing her of lying as the final straw in their friendship. In her blog, Lisa writes, ‘That is where the show started but is ultimately where our friendship finished.”‘

But this year, Lisa seems determined not to let the bad memories of her past keep her down. The Vanderpump Rules matriarch said on her Instagram, “Thank you for your birthday wishes! It’s been a tough year.” Interestingly enough, one star who responded to Lisa and wished her a happy birthday was Kim Richards. Meanwhile, some fans turned the conversation back to the bad ending on RHOBH.

Thank you for your birthday wishes! It’s been a tough year, but next year will be better! 💝

Fans agree that Lisa looks great as she nears her 60th birthday. They know that she’ll always remain graceful, no matter how old she gets.

@roccojweinat said, “Ahhhh Lisaaaa you know this year is only going to be the best! Happy Bday Boss! Thank you for all that you do and also you raised some pretty dope and amazing kids! Make this year about happiness and new adventures just don’t open a new restaurant and leave me behind lol.”

Many other congrats poured in for Lisa from her RHOBH and Vanderpump Rules fans. One wrote, “Happy Birthday Lisa, one beautiful classy woman. May all your birthday wishes come.” Another fan spoke for so many fans of the classy star.

@soulsista323 shared, “@lisavanderpump wishing you Happy Birthday to an amazing soul and yes you deserve to be happy.”

Are you standing for Team Lisa? Hopefully, many blessings pour in from her fans on her birthday this year. Sound off your thoughts in the comments below.

Remember to check back with TV Shows Ace often for more news about Lisa and Vanderpump Rules.

See Pictures Of Josh & Anna Duggar Like You’ve Never Seen Them Before
‘Renovation Island’ Resort: How Much Does It Cost To Stay?
OMG!!! Hulu Has BIG NEWS For Fans Of ‘Solar Opposites’
Wait, Are MORE New Episodes Of ‘Storage Wars’ Coming?!
Braunwyn Windham-Burke Is Dating This ‘RHOC’ Star