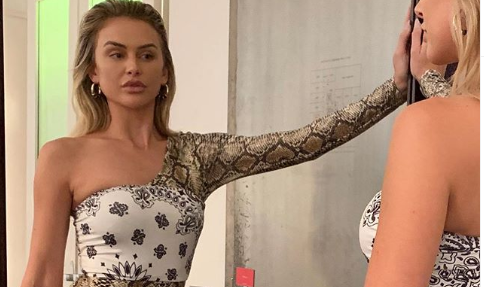 Ambyr Childers has had some things to say about her ex’s fiance, Lala Kent. Recently Lala managed to reopen the door on her beef with 50 Cent. The original feud had been squashed when Lala’s fiance paid the debt he owed Curtis Jackson. Now Ambyr Childers is responding to the most recent slam from 50 Cent.

Ambyr has never said anything really terrible about Lala Kent but she did call her out after she wouldn’t take down pictures of her kids. Randall Emmett and Ambyr have two children together and Lala continued to show them on her social media without Ambyr’s permission.

What Did Ambyr Childers Day About 50 Dissing Lala Kent?

After Lala Kent claimed she bruised 50 Cent’s ego, the rapper responded. He donned a curly wig and posted the clip of Lala saying she , “let Randall hit it and he gave her a Range Rover.” He shared a picture of her in bed with Randall and captioned an imaginary conversation between himself and the producer.

He also made fun of her previous statement she was drunk for four days straight with kids at Disney. Not only that, he suggested she also used coke during that time. He said maybe that was the reason she thought she bruised his ego.

According to the Inquisitr, Ambyr Childers said, “oh boy…here we go again! I need a glass of wine for this one.” she posted on 50 Cent’s Instagram when she saw his digs.

Ambyr Childers Has Also Had Words With Her On Social Media

The Ray Donavan actress had asked Lala Kent to stop posting pictures and videos of her kids until she was officially their step mother. The two Vanderpump Rules stars will be getting married in April.

Instead of respecting her request Lala doubled down on posting the videos. Even one she posted was a picture one of the kids had drawn of their family including Lala. This prompted fans to attack Randall on social media saying she needed to stop.

“The way you let Lala disrespect your daughter’s mother is disgusting,” a fan said. Another posted, “you need to check her. The mother of your children told her to stop and she still hasn’t.” Ambyr better get a large bottle of wine ready because there’s no way this feud is close to over.