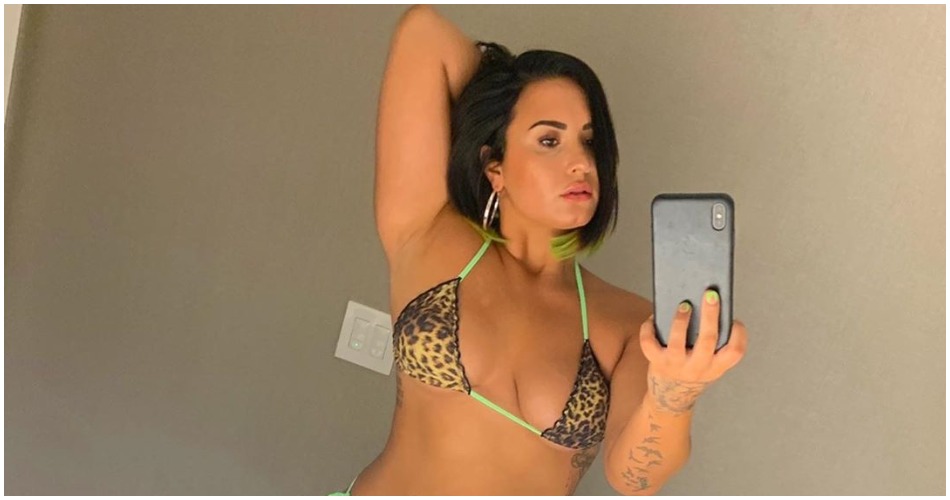 A recent interaction between Mike Johnson and Demi Lovato sent Instagram into a frenzy.

A picture is worth a thousand words and the recent one Demi Lovato shared on her Instagram is no exception.

Lovato said she’d photoshopped her other bikini photos, and she was sharing this one. It was something she feared.

But, she said she was tired of being ashamed of her body. Demi had reportedly suffered from an eating disorder in the past. So, this is a big step for her. She’s been very open about her issues with foods. Which is one of the reasons her fans love her so much.

It wasn’t the picture or the caption that got fans excited on this Instagram photo. It was Mike Johnson commenting on it that had them going crazy. The former Bachelorette star said, “look at me like that again, love yaself.” He clearly appreciates what he sees when she posts any picture.  She posted another unfiltered picture in a bikini shown below.

Has The Relationship Between Demi Lovato And Mike Johnson Progressed?

According to People Demi has never been shy about her love for Mike Johnson. She responded to Mike’s comment on her bikini pic with kissy faces and tougue-sticking out smileys.  A source says, “they’ve been talking privately for a bit and hanging out.”

Fans also freaked out when Mike Johnson commented on a post Tyler Cameron put up saying, “so if we do this dbl date, your shirt stays on.”

Throughout Hannah’s season of The Bachelorette, Demi has let Mike know of her affection. On her Instagram story she said, “Mike I accept your rose.” In another, when Mike Johnson tweeted that he was looking for his future wife, Demi said she was right there and her mom already loved him.

When asked about it by People last month, Mike Johnson said him and Demi hadn’t connected yet or exchanged freaky texts. He said he thought she was sexy and had a nice little booty. But, if what the source says is true, fans could see them out on that double date sooner than later.