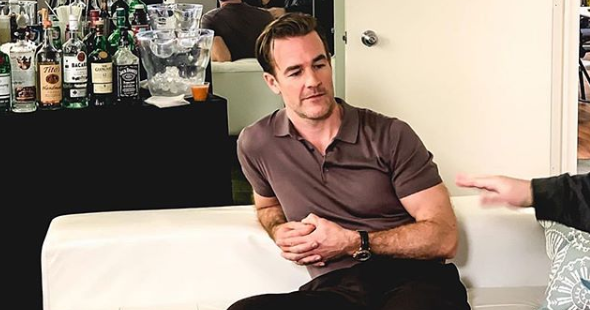 James Van Der Beek has enjoyed having a pretty unique career. From teenage angsty Dawson to wild and reckless Diplo, to his scheming character on Pose, he’s played a bit of everything.

Now, he’s going to take on another role as a dancer. The father of five hilariously portrayed himself doing DWTS on Don’t Trust The B In Apartment 23. The more diva-like James Van Der Beek had fans rolling during the unfortunately now cancelled show. Now, he’s come full circle as he’s finally ready to take the plunge for real.

Van Der Beek commented on the fact that he did the show and now he’s doing it for real, saying, “I don’t think it could be any more meta without all of our brain imploding,” according to US Weekly. He said the idea for the story line came from him. He thought it would be fun to play a scene where fake him broke down and hallucinated on the dance floor. James said he learned one cha-cha for the show.

Happy National #DogDay from our family to yours. Our dogs get married a lot. They were rescued from the same pound on the same day, so we’re not 100% sure they’re not related… but it’s not like keeping them from getting married would curtail their extra-curricular activities, if that was their jam, so… we try not to think about it too much. Sorry for over sharing. But they are, as you can see, incredibly patient dogs. And for that we’re very grateful. (And yes, after a whole bunch of kids, we decided, “You know what might make this house really super crazy? TWO chihuahua mutt rescues. Let’s do it! 🤦🏼‍♂️) Love them, though…

Why is now the time for James Van Der Beek to take on DWTS?

Ever since James Van Der Beek portrayed himself on the show doing DWTS, he says he’s been asked to join every single year. He’s always turned it down because the time wasn’t right. This year, the timing was finally right. He decided he really wanted to do it, because he loves dancing although he admits the real show is “exhausting mentally, physically, and emotionally in the best possible way.”

Season 28 is going to be his year. Van Der Beek is in good company with Kel Mitchell of All That and Christie Brinkley, among lots of others. There are also some reality stars joining the Dancing crew. Hannah Brown of The Bachelorette, Karamo Brown of Queer Eye, and Khloe Kardashian’s ex-husband Lamar Odom.

With a wide range of personalities, it’s sure to be a great season. Fans of all types from Dawson’s Creek to KUWTK will have someone to root for on the show.

James Van Der Beek also told US Weekly one of his favorite things about acting is when he gets to learn skills from the best in the world. These are skills not everyone gets to learn. The Pose star said no matter what it is he would seek out things he couldn’t do to go through the humility of not being good at something. He liked “working through the challenges and then coming out on the other side with a new skillset.”

Fans will love watching him battle it out on the dance floor for real in the new season coming up!