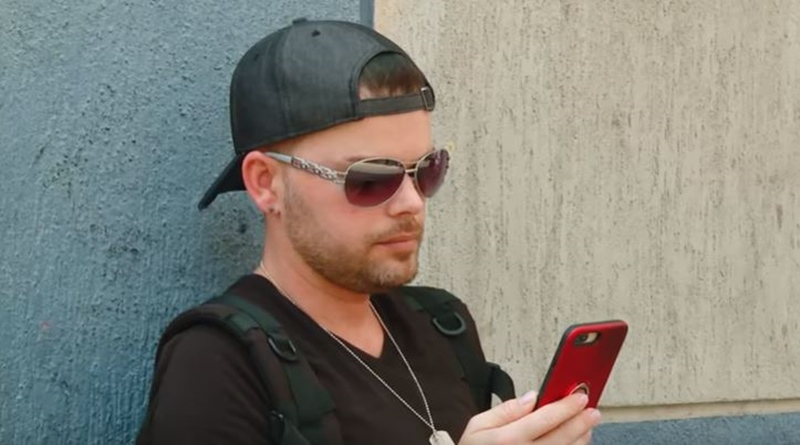 90 Day Fiance fans might wonder what goes on in Charlotte, North Carolina on a Friday. Well, if Tim Malcolm’s anything to go by, some pretty bizarre things happen. We know Tim’s into fashion and fashionable women, but fans were amazed at his bright blue hair, loved his new tattoo and giggled at the handsy skeleton in his latest Instagram post.

Late Friday night, Tim took to his Instagram to share his new tattoo and give a shoutout to the artist. Well, fans liked the tattoo, which wasn’t very clear in the photo. But Tim explained its actually two words. On the top it says “hate” and underneath, it says “love.” So, it’s a word with double meaning. Some fans wished he’d put the word “love” at the top. But Tim said, “Everyone sees the meaning differently. For me, it’s that you can turn hate into love. So many people want to spread hate and I try to take all that hate and change it into love. ❤️❤️”

And, it seems obvious the red and blue style fashion-sandwich turns on some love with his new outfit and tattoo. That’s because the skeleton he’s standing next to has a huge approving grin and seemly can’t contain itself. In fact, as many fans pointed out, it’s way too handsy in the picture. One 90 Day Fiance fan joked, “Lol the hand on that skeleton 😂.” Meanwhile, another said, “violated by skeleton man.” But most people just wondered about the blue hair. That’s because Tim looked a bit like a sandwich. Bright blue top, bright blue bottom, and shades of red in the middle.

Tim Malcolm’s out for a good time, and his fans and followers reminded him his hair was bright blue. Yes – they seriously did remind him. One fan said, “Tim your hair is blue 🥺🥰🎈.” Oh yes, that started the blue hair comments. And, that’s not a huge surprise because this hair is blue, metallic blue, not just any blue. One 90 Day Fiance fan said, “Dude what is up w the hair thoooo?” with another commenting, “I love it! 👏🏻 Definitely rocking that blue hair!! 🤗.” Another fan didn’t like the blue so much though, noting, “that blue hair.. yikes.”

But we noted the reddish beard and the bright red shirt sandwiched between the electric hair and his bright blue jeans. Rocking red so bright, that hurts the eyes, it’s kind of hard to know where to look. Maybe that’s why he’s wearing his coppery colored shades, so he can sneak around the streets of Charlotte looking anonymous.  Actually, it’s a stunning and different outfit that shows Tim’s got a great sense of humor.

The picture of Tim Malcolm

Here’s the sad news for those people who don’t follow the 90 Day Fiance: Before the 90 Days star on his Instagram yet. It’s a private account, and you need to request to follow him. Not that he seems to vet out people he doesn’t know, but there’s no trolling and hate there. Because the account’s private we can’t share the embed. But, don’t despair, one of our in-house non-artists reproduced it and you can see it below. (If it’s not completely accurate, have some mercy. After all, their eyes are still burning from looking at the photo for too long).

What do you think of Tim with his bright blue hair, his red tee, the handsy skeleton, and his new tattoo? Do you think Tim Malcolm’s a really funny guy sometimes? Sound off your thoughts in the comments below.