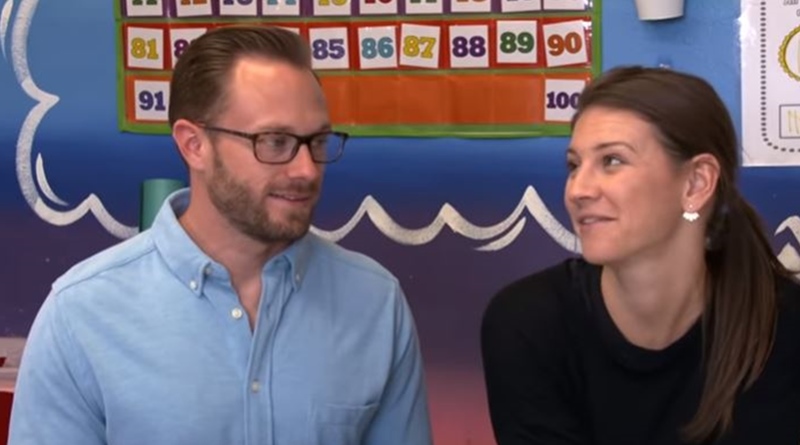 OutDaughtered fans know that the Busby quints all went for intelligence tests for Pre-Kindy. And, we saw in the clip that Riley rocketed off the charts. That meant a difficult decision for Danielle and Adam, and finally, they decided to jump Pre-K and put her into Kindergarten. Some fans thought that was too awful, but others love that the parents of five quints and Louise Blayke allow each child to grow their own personalities.

TV Shows Ace reported back in August that Riley passed her tests so well, they did more tests. At the time, we noted, “on their Itsabuzzworld Instagram account, Adam shared some unexpected news. Riley went straight to Kindergarten. Meanwhile, her sisters “Ava, Olivia, Hazel, and Parker start upper rotation Pre-K.” Incredulous fans asked about it, and Adam replied, “ain’t a manual for raising quints.”

Actually, we also found it rather interesting that “mischievous” Riley started making her personality known in the womb. In an old clip about NICU, “Riley was always the feisty one. All over in my belly, always kicking, always like punching around,” Danielle said. After the birth, she was still “typically that way.” It seems Riley was off to a good start and wanted to grab life with both of those flailing little hands.” But, despite being full of mischief and super-bright, these traits bring future decisions to the OutDaughtered family. And, some of them could be quite difficult.

According to an Instagram post by Adam Busby, Riley “crushed” her first day at Kindergarten. He shared a photo of her all tuckered out and asleep with her little doggie. But the interest by fans really grows, so on their It’s a Buzz World channel on YouTube, the Outdaughtered parents shared more about it. Plus, the next season of the show comes soon, and we all hope to see more of Riley’s journey.

Adam said on Youtube that things needed some figuring out. This means a change in routine for one of the quints. He noted, “Routinely, Riley is actually gonna go with Blayke.” As Riley’s in Kindergarten, Danielle will drop off both girls. For Riley, that means “Monday through Friday.” So, all the different alternatives were worked out so the Busby parents could spend time with all the quints and Blayke on their respective first school and Pre-K days.

The future decisions regarding little Riley

For the OutDaughtered parents, who obviously took advice from various educators, the future may bring even more difficult decisions. As Adam noted, “It’s just going to leave us with a big decision to make at the end of this year.” It all depends on how Riley does at school. After all, they have the choice of pushing her through to first grade. Or, they can hold her back in kindergarten when her quint sisters get there. That might be hard on Riley. It’s all unknown ground for the Busbys. But whatever happens, you can bet avid fans will follow every possible moment of it.

What do you think about all the difficult decisions that the Busby family face with super-bright-spark Riley? Did you ever face any similar situations and decisions? Sound off your thoughts or experiences in the comments below.

‘Seeking Sister Wife’ Dimitri and Christeline Married?
Rachel Lindsay Lets Fans Know She’s Not Backing Down
Mama June Reveals HUGE Weight Gain & What She Will NEVER Do On TV
Will ‘Seeking Sister Wife’ Continue After Dimitri Snowden Scandal?
‘Bering Sea Gold’ Is Back For Season 13: Airtimes, Who Is Back On Discovery Show?