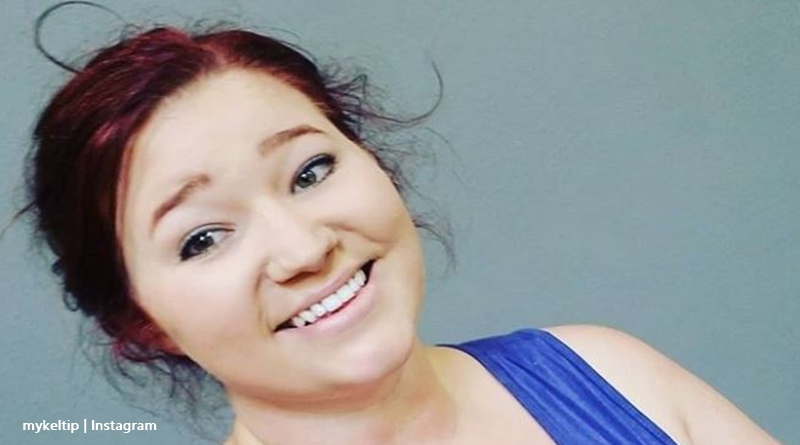 Sister Wives daughter Mykelti Padron rumors ran rife about her being pregnant earlier this week. TV Shows Ace noted it came after she posted a photo about not being able to drink coffee. We noted, “One of the Browns’ daughters, the first for Christine and the second for Kody, has been in the news lately for what originally seemed like nothing but a harmless Instagram post.” But it turned out to be just the fact that she wasn’t drinking coffee as she’d run out of it. Now, she debunked the pregnancy rumors in a funny post.

Fans of the TLC show know that Mykelti and Tony Padron got engaged in 2016. InTouch Weekly noted back then that “Though we just saw Mykelti Brown’s wedding to Antonio Padron…The duo honored her dad’s request that they wait at least a year to have kids.” Well, fans know that did come to pass as Kody’s other daughter, Maddie Brown just delivered the second Brown grandchild, following the birth of her son Axel. So, it’s not unnatural for fans to hope for a child for Mykelti and Tony.

Of course, fans keenly inspect every photo they see, in the hopes of spotting a baby bump. Actually, that might be a bit embarrassing for the Sister Wives daughter of Christine and Kody. But, she takes it with good grace and a huge sense of humor. In fact, her Instagram post on Wednesday, September 11 almost fooled fans a second time around. But, in her caption, she let them know she was joking around, and she’s not pregnant at all.

I need more coffee to be honest, but since I can't have that yet, I have Mitzi. The new LuLaRoe top. WITH POCKETS #lularoemitzi #lularoeretailer #needcoffee

Taking to her Instagram. Myklei shared a photo of her in a tee-shirt. The printing on  the tee said, “Instant baby, just add sperm.” Before they read that caption, some Sister Wives fans admitted that she nearly got them, and they thought she was making a pregnancy announcement. But her caption read, “I AM NOT PREGNANT. This shirt was given to me as a gift because of how much that person knows me. I want to have children so much. It’s one of the things I talk about most often.”

But, Mykleti also continued in her post, noting that she and Tony really have some goals they want to meet before starting a family. She added that they love each other deeply, but “we aren’t ready to share that bond with a wee babe yet.” Kody’s other wife, Janelle replied, saying, “This is so you honey! Always looking for the shock value – one of the things I love about you!” Meanwhile, other fans really want the tee-shirt for themselves.

I AM NOT PREGNANT. This shirt was given to me as a gift because of how much that person knows me. I want to have children so much. It’s one of the things I talk about most often. My best friend and I are enjoying our marriage as the two of us for now and we are working towards accomplishing some goals before we decide to start a family. We are loving the intimacy we can share and the bond we have together and we aren’t ready to share that bond with a wee babe yet. I know the shirt may be crude or offensive to some, but I must say I am extremely in love with it. It’s fast becoming my favorite piece in my wardrobe. Plus if we got a wee babe our Spader may not be too happy with sharing our attention. #instanthumanjustaddsperm #happymarriage #becauseoflularoe #furbaby #totallydiggingthegreen

What do you think about all the pregnancy rumors surrounding Mykleti Padron? Do you think her funny post’s finally settled the rumors for now? Sound off your thoughts in the comments below.