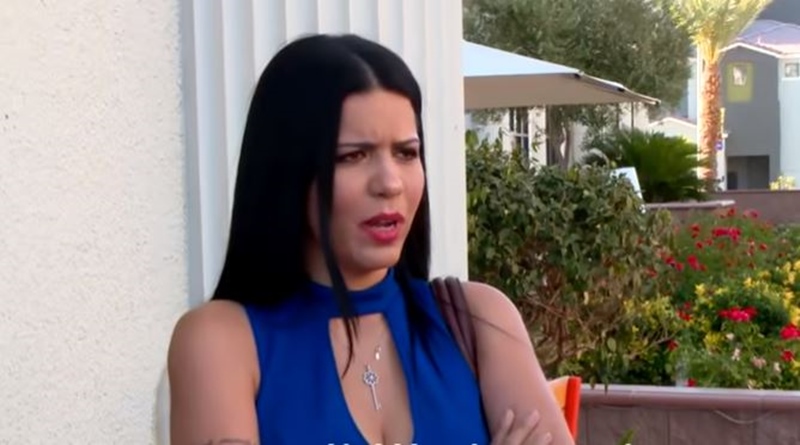 90 Day Fiance fans thought Larissa Lima was in a good place. Since divorcing Colt Johnson, we soon heard she’d hooked up via a dating app with Eric Nichols. Many videos and pics followed and they seemed blissfully happy. But, in a surprise move, Larissa announced their breakup on her Instagram on Wednesday. Plus, it looks like she removed all the photos of Eric from her Instagram. It came hot on the heels of rumors that the couple’s in negotiations with TLC to shoot for their Happily Ever After? spinoff.

First, Larissa announced the split via her Instagram Stories. However, she later deleted that and shared it in a standard IG post. The text on the card-photo said, “Break Up Note.” In her caption, Larissa noted, “After 8 months of being Erickee’s girlfriend I have to tell my followers that we have decided to break up and go our separate way. There is no hard feelings or regrettees, but I need to look in my own soul and focus on being the best Larissa I can be.” She went on a bit more about it, noting that she felt she tried to “heal” the bad relationship with Colt by “jumping into another.”

Obviously, as things looked to be going so well between the two, 90 Day Fiance fans were saddened to hear the news. Some of them just wished her all the best for the future. In fact, Larissa said she’s not sure what the future will bring. However, she added, “but I am excited for it.” It’s quite interesting that she also tagged her manager in her post. Finally, she hashtagged #90dayfiance and #newchapter. Her final comment was, “Thank you, guys.” Either the manager wrote the post, or she’s hinting she’s available for work.

It’s interesting that the breakup came just a few days after rumors came out that the couple, Eric and Larissa are in talks with TLC. Soap Dirt reported their TLC insider told them the couple was negotiating to take part in 90 Day Fiance: Happily Ever After? In their article, they wrote, “An inside source told Soap Dirt that Eric Nichols and 90 Day Fiance star Larissa Dos Santos Lima are in negotiations with TLC to appear on Happily Ever After.”

The news outlet pointed out that as most fans know, they usually feature stars that “are already married.” However, their inside source apparently suggested exceptions would be made for Eric and Larissa. Of course, that’s not an unexpected rumor. After all, fans saw Colt lose it in the Happily Ever After Tell-All. TV Shows Ace reported at the time, “the aggression really came from Colt when her new boyfriend pitched on the scene. During the episode, boyfriend Eric suddenly appeared on the chair next to Larissa, and Colt went ballistic. “Who the f*ck are you?! Get the f*ck off the screen,” Colt yelled at the video conference. He also added, “You’re not part of this dude, get the f*ck off!”

Fans speculated that Eric might appear in more TLC shows

After the Tell-All, fans immediately speculated we might see more or Eric in a future spinoff of the TLC show. But, in the light of this breakup, is that likely? After all, if they were in talks, Larissa just spoiled the outcome already. Of course, TLC garnered loads of experience on spinning a story, so it does not mean they won’t feature in a future franchise. But, on the surface of it, it looks like the inside information might be a bit off the mark. What do you think about this? Are you surprised that Larissa announced she and Eric broke up just as rumors arose that they were in talks with TLC for Happily Ever After? Sound off your thoughts in the comments below.

Remember to check back with TV Shows Ace often for more news and rumors about 90 Day Fiance.

Savannah Chrisley Stuffs Tiny Waist With TONS Of Cookies
‘LPBW’: Little Lilah Does The Most Precious Act Of Love
Chase Chrisley Shuts Down Todd, Gets Good Qualities From Julie
‘Below Deck Med’: What Made Lexi Wilson Fire Back At Producers?
Disney+ Day Is November 12, All The Good Stuff You Need To Know