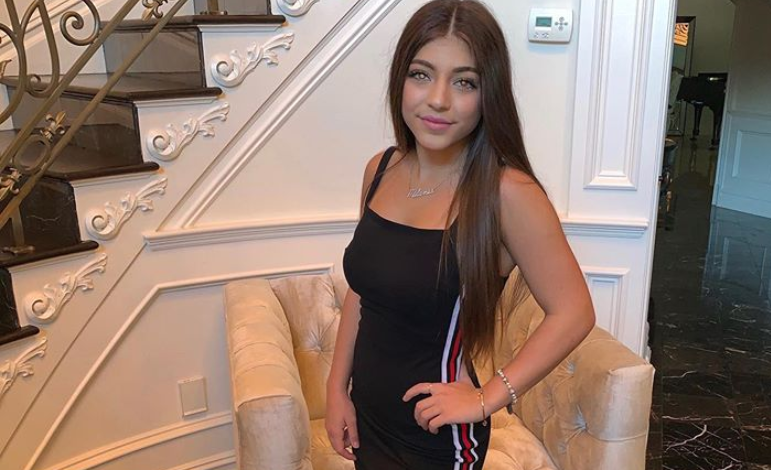 Like every mother out there, Teresa Giudice of RHONJ posted pictures of her daughter’s first day of school according to All About The Tea.

The Instagram post got a lot of attention for Milania Giudice’s revealing clothes. Teresa’s daughter is thirteen years old and going into the eighth grade. One Instagram follower commented, “don’t forget you’re the mom, not the friend.”

The thirteen-year-old is wearing a pair of camouflage pants and a sleeveless top. The top is a black tank top and the neck line is a little low cut, but nothing risque. Fans are saying it’s too risque for an eighth grader. She also has a full face of makeup. And, fans took issue with that too.

Teresa posted the picture and captioned it, “happy First Day of School @milania_giudice356 Love you so much.” She hash tagged it eighth grade and Instagram lost their minds.

Happy First Day of School @milania_giudice356 Love you so much 😘❤️ #8thgrade

Several of the comments center around the shirt being inappropriate for school. Some insisted that there isn’t anyway it is appropriate for the dress code. One fan said, “I don’t believe she is age appropriate to wear that shirt. She is going into 8th grade not the club.”

Another follower said it was too much that grown man were looking at her dressed like that in an adult way. They said, “when you have grown men on here talking, ‘sexy , beautiful, stunning etc.’ ENOUGH SAID.”

Another commented is she going to educate herself or audition for a rap video?”

In another photo, Teresa Giudice also shared her daughter Audriana Giudice as she goes back to school. Audriana is ten. Fans also had some things to say about her look.

“She’s going to school not a photo shoot. Seriously had someone do her hair?? Geez I guess whatever it takes to be noticed and get attention! How’s your husband, remember him?? Obviously not!”

Fans do not think Audriana is old enough to wear makeup and they don’t think Milania should wear it to school.

Teresa Giudice has been called out for letting her young daughters wear makeup before, but she clearly doesn’t care what those people think. Like most reality TV moms she has to do what she feels is right for her daughters while the world disagrees with her.