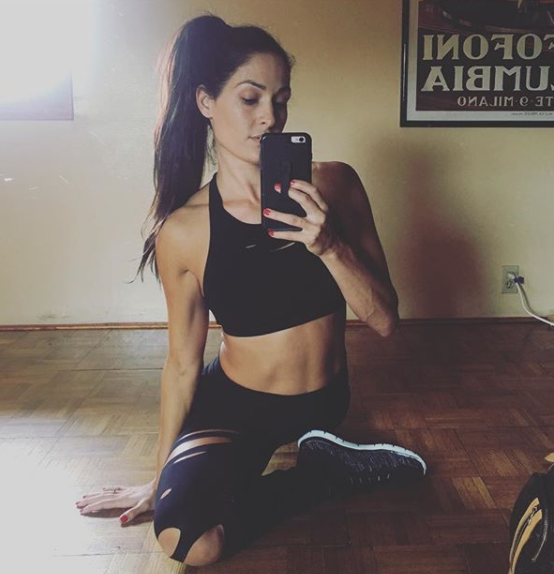 WWE Superstar and star of the popular reality series Total Bellas, recently posted a video on Twitter sporting an all too familiar outfit. Dressed in her iconic Fearless crop top and backwards hat, Nikki teased fans about returning to the ring.

“I’m feeling like I need to come out of retirement”

Fans were quick to get excited following the video, which appeared to take place in a local gym.

Nikki began her wrestling career in 2007 alongside her twin sister Brie Bella. They were signed with World Wrestling Entertainment where they performed in the Florida Championship Wrestling. The tag-team duo defeated Nattie Neidhart and Krissy Vaine in their first appearance. Nikki and Brie dominated in the FCW before being drafted to RAW in 2008. Nikki’s last appearance in the FCW was during a Divas battle royal.

The Bella twins continued to shine in the RAW brand. They competed in an 8 Diva tag team match to make their debut. The Bella twins competed for more than a decade and held the Divas Championship for a record-setting 301 days. The Bellas dominated the arena by use of their signature move “Twin Magic” which consisted of switching places with each other becoming an imposter for the other.

Nikki began appearing in the hit reality show Total Bellas October of 2016 alongside sister Brie. The reality series just finished its fourth season and currently airs on the E! Network. Total Bellas follows the lives of the Bella twins. The series follows the everyday lives of the Bella twins as they deal with their careers and relationships. Triumphs are made and hearts are broken in the series. Nikki copes with her relationship and eventual breakup with WWE superstar John Cena. Drama encompasses the series as Nikki deals with her sudden retirement from the WWE.

Although Nikki teased in her Twitter video that she wants to return to the ring, it is unlikely. The 35-year-old did not retire by choice. She suffered from several neck injuries during her time in the WWE which resulted in surgeries. Bella was eager to continue competing, but doctors forbade her to return after discovering a cyst on her brain earlier this year. Nikki made the announcement on The Tonight Show back in June where she explained her situation.

“I really wanted to go back and fight for the tag titles. I’ve always had my neck issues, and after neck surgery it hasn’t been OK. I felt like I needed to get that checkup before we went back for the tag titles. Then it came back that I herniated the disk above where I had surgery. I have all this inflammation around the metal, and then I have a cyst on my brain. So they were like, ‘You’re done, no more, you’re out.’”

Nikki has not stopped moving since her retirement and seems as happy as ever. Though her return to the ring is very unlikely, you can still see her on the reality series Total Bellas, which has been renewed for a fifth season. Keep following TV Shows Ace for more on the Bella Twins.

‘Seeking Sister Wife’ Ashley Snowden Celebrates Father’s Day With Another Man
‘Below Deck Sailing Yacht’: Jean-Luc Breaks Silence On Dani’s Baby
Which ‘RHOC’ Alum Could Return As ‘Friend’ Of The Housewives?
‘Luca’ Post-Credits Scene Explained: What The Heck Happened?!
New Netflix Show ‘Sexy Beasts,’ You Have To See It To Believe It