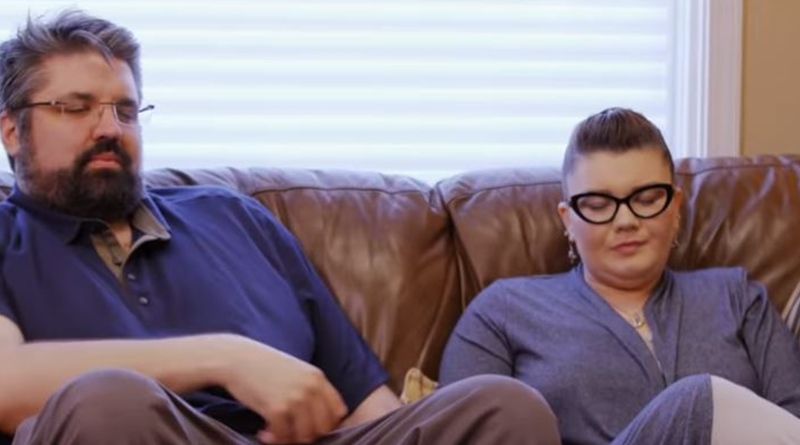 Teen Mom OG fans know that Amber got arrested after allegedly taking off after Andrew Glennon with a machete.

Since then, Andrew took over custody of their son James. But, things between the former flame continue to get ugly.

Amber Portwood is retaliating against Andrew and all the tea he’s spilling on his social media. Now, Andrew is claiming both he and baby James suffered abuse from her. Plus, other alleged bad behavior emerges.

Last season of the MTV show, some fans thought Andrew appeared stressed around Amber. The tension jumped off the screen. It looked like Andrew was very carefully about not setting her off. However, the tactic failed. In front of their son James, she still exploded with rage often. Since the big arrest and hype around the tabloid media, things deteriorated. Andrew’s spilling all sorts of stuff on his Instagram. Plus, he enlarges on his issues in the comments of his posts. Enraged, Amber lashed back in a fury on her IG Live.

Actually, the Teen Mom star nearly breached a no-contact order as she raged about Andrew. The Ashley’s Reality Roundup reported on it.

Amber said: “And I’m saying this to you, the fans, because I can’t talk to him I have a no contact order. I can’t f**king talk to him. I’m saying to you guys that I’m not going to have this slander against my name.”

It came along with a tirade about how she intends retaliation against the allegations Andrew made about her. Just one of those claims is that Amber abused her son and himself. But, some fans squabble over who’s the victim in this.

Allegation that Amber got high, locked herself in the closet

The allegations about the abuse of James included Andrew dishing: “She wasn’t taking her medication, she attacked my son and I on more than one occasion, and I pray she gets the help she needs. ”

He added that James got “shoved over flat on his back on a tile floor for opening cabinets. Or being thrown on the bed for crying…”

But, one comment he made on his IG post three days ago saw fans talking about victim shaming. It came when a follower wrote, “Saying that she sits in a closet and does drugs is it very cool to blast on the internet?”

Andrew made his standpoint by saying: “I’m talking about MY life here… was it very cool to live each night? Your ‘soulmate’ would rather be away from you, locked in a closet for hours on end getting high instead of cuddling you at night?”

Some fans picked up on the fact that some people seemed to be shaming the victim in the ugly Teen Mom OG situation. As @amyespo1021 said, “It seems like hes [the] only one who tried to get her help and not enable her. Yet he reached his breaking point. Stop victim shaming its gross (sic).”

What do you think about all this ugly drama that plays out between these two adults? Do you believe Amber Portwood would physically abuse her son James? Some fans wonder why a big strapping fellow like Andrew Glennon fears his wife attacking him. But, others know that abuse takes many different forms. Perhaps Andrew just tried to protect his son? Sound off your thoughts in the comments below.