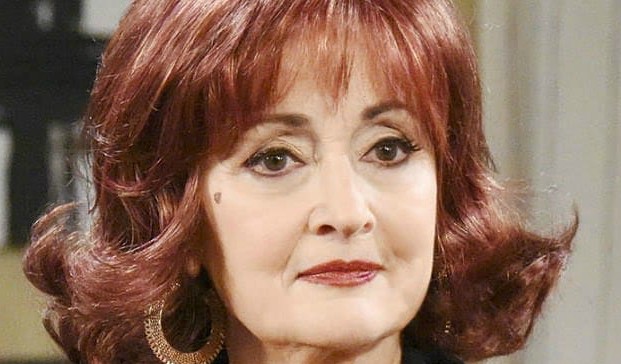 Days of Our Lives recently added soap vet Robin Strasser to the cast. She is playing the role of iconic Vivian Alamain. She’s only in Salem for a short time, but she’s already tussling with Kate (Lauren Koslow). And, sticking her nose in her son’s marriage.

What else does the daytime staple have in store for fans this week?

DOOL’s Eric Reunites with Nicole, Not Knowing Sarah is Pregnant

The Eric (Greg Vaughan) and Nicole (Arianne Zucker) story is moving along at light speed. It was just two weeks ago that he found out she was alive. This week, the former couple is reunited. However, Sarah (Linsey Godfrey) is waiting back in Salem with surprising news of her own.

She’s pregnant and thinks the baby is Eric’s. Meanwhile, Eric confesses to Nicole about his dalliance with Sarah. He then quickly calls Sarah to break up with her.

Xander (Paul Telfer) quickly discovers her secret. Will he tell or keep it under wraps?

Soon after getting back to town, Vivian runs into Kate. She blames Kate for her “death,” after the two struggled for a gun. She holds Kate at gunpoint. The promo shows Vivian covering a mound of dirt. Kate’s hand comes up out of the ground. Jennifer (Melissa Reeves) and Kayla (Mary Beth Evans) stumble upon Kate’s body.

They quickly rush her to the hospital, but is it too late? Did Vivian shoot her or was there another culprit?

Days of Our Lives: Eve Seeks Revenge On Jack

Speaking of Jennifer, Eve (Kassie DePavia) is on the warpath after Jack (Matthew Ashford) dumps her. She finds out about Dr. Rolf (William Utay) returning to town. She is determined to ruin any chance Jack has of getting his memories back.

She asks Vivian for help in her quest to ruin Jack. How will Vivian react to Eve’s request for help?

Kate and Julie Are Both Declared Brain Dead – Who Survives?

As fans know, Julie (Susan Seaforth Hayes) suffered a heart attack last week during an argument with Gabi (Camila Banus.) Kayla discovers that Julie’s heart is damaged. Without a transplant, her chances are grim.

At the end of the week, both Kate and Julie are declared brain dead. Only one of them survives. Does Julie get Kate’s heart?

Tune in to Days of Our Lives weekdays on NBC to find out if Julie lives thanks to Kate’s heart.