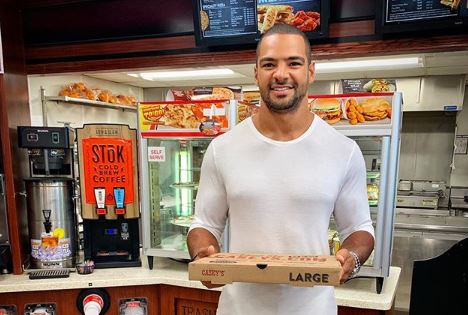 It Almost Could Have Been a Joint Wedding in Paradise

We’re approaching the final three episodes of this season’s Bachelor in Paradise. TV Shows Ace hasn’t focused much on Clay Harbor and Nicole’s relationship. Early on, they were one of the stronger couples in Paradise. Even after Nicole went on back-to-back dates with two other guys. Then they went to Krystal and Chris’ wedding where Angela was the drop-dead gorgeous, thinned down maid-of-honor.

Major love to @anastasiabeverlyhills for glamming the Bridal Party and our gorgeous queen @coachkrystal_ on her wedding day! 🙌🏻 Still obsessing over this look 😍 #bachelorinparadise #glittergoosewedding

It was actually Chris who had fixed Clay and Angela up after Angela had confessed to Chris (who she knew from Season 5 of Bachelor in Paradise) that she was interested in Clay Harbor.

The couple began dating last September and were super serious for seven months. They discussed moving in together and having children. Angela was even willing to move to wherever Clay signed with the NFL. Hmmm….maybe that was part of the problem. After all, people always want what they can’t have and the thrill of the chase. Plus, it’s important to have your own goals, dreams and ambitions.

To refresh anyone’s foggy memories, Angela appeared only on night one of Nick Viall’s season of The Bachelor. Like Grocery Store Joe, she didn’t get a rose during the premiere. Clay injured his wrist while competing for Bachelorette Becca and left the show on his own to let his injury heal.

It’s important to note that Clay Harbor broke up with Angela in March after he didn’t get resigned by the NFL. Clay basically questioned his future. But there are some gray spots to this couple’s seemingly black and white timeline. Clay dumped Angela only two weeks prior to leaving for BIP filming. Could it really have been that Clay needed to be single and ready to mingle to get an all-expense-paid trip? He also received a day rate he negotiated for appearing on the show. This is why Annaliese verbally attacked him at the beginning of BIP this season and accused him of dating too soon. At the time, it seemed Annaliese was in the wrong and should have minded her own business, but now in hindsight, she really knew what she was talking about.

The Slimmed Down, Nicely Toned Body is the Best Revenge

When Angela arrived in Paradise, Clay Harbor was not acting like a man that was over his ex. Even with a new woman by his side (who has been head over heels in love with him), he was getting completely bent out of shape watching his “friends” going out with his “ex.” It doesn’t hurt that Angela looks damn fine, flaunting her revenge body. (Without even having to sweat at the gym for 4 hours a day)

Clay went from being Bachelor in Paradise‘s sweet and cuddly teddy bear to a downright nasty grizzly bear when he divulged his real reason for dumping Angela out of the blue in March.

Clay had a brief chat with Angela prior to Tuesday night’s rose ceremony. He told Angela that he disliked being the main breadwinner in the family. He felt he should be with someone who was more ambitious and with someone who would spend four hours a day in the gym.

As Bustle reported, “…Clay’s remark about Angela not being ambitious enough for him because all she wanted was to be a “wife” and “mother” definitely hit a nerve in the BiP fanbase, causing many viewers to take to Twitter to defend Angela and stand up for her character.”

“…And for Clay, if it’s ok for him to be there, why can’t you. He just doesn’t want to see you with anyone else. Whenever he’s done with his games [both on the field and at the beach], he wants you there. You’re too beautiful to deal with Clay and Nicole,” one fan wrote.

“You were on a date being happy and beautiful while Clay was sitting around stressing about you and his ‘girlfriend’ was losing her mind with jealousy. Priceless,” another fan pointed out.

“An unemployed dude who goes to the gym for four hours a day telling an ex-girlfriend that wanting to be a ‘wife and mother’ isn’t ambitious enough for him sums up BEING A WOMAN IN A NUTSHELL,” Entertainment Weekly‘s Kristen Baldwin tweeted after Tuesday’s episode.”

Countless other women echoed that sentiment, remarking at the incredibly unfair double standard at play here.

Tune in Monday and Tuesday for two last two episodes in Paradise, followed by the reunion show on Tuesday, September 17, 2019.  The night before the reunion show, Hannah will start performing on Dancing With The Stars on Monday, September 16, 2019. Lots of can’t miss television happening the next few weeks as the Fall season kicks off.

Briana DeJesus Just Got Engaged… Is It Already Over?
Erin Krakow Wants Lori Loughlin To Return To ‘When Calls The Heart’
Jenelle Evans Looks & Feels Fancy, Trolls Still Cut Her Down
Is ‘Counting On’ CANCELED? Abbie Duggar Drops More Hints
Trent Johnston Whips Out His Blower To Spice Up Lunar Celebration