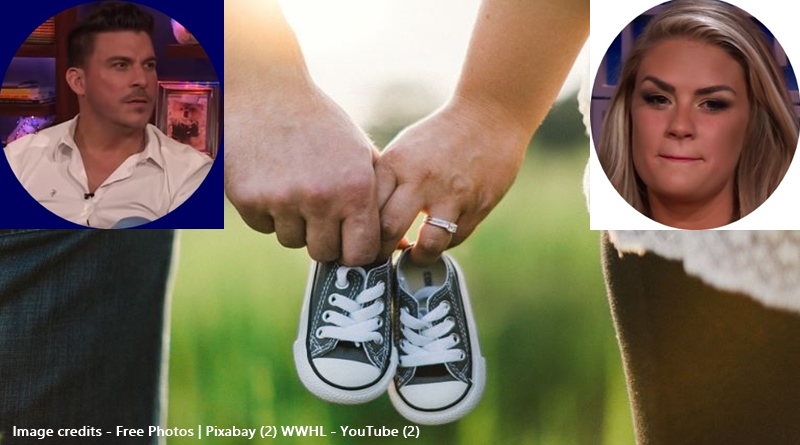 Vanderpump Rules stars Jax Taylor and Brittany Cartwright married in a fairytale wedding back on June 29 in Kentucky. Since then, rumors arose of trouble in paradise. TV Shows Ace has since debunked that.

Meanwhile, fans hope for news of a baby soon. But, it looks like Jax Taylor’s feeling a bit pressured to make babies. He mentioned it on his Twitter after spotting a story about it.

Brittany’s not scared to talk about babies. But, for now, she’s got their gorgeous pups and her new hubby to cuddle up to. Plus, with PumpRules filming right now, maybe they won’t rush into it. US Weekly‘s week Sept 16 mag carries the story about it. Titled “Babies on the Brain,” their article’s available to read on Press Reader. It says that Brittany might soon be calling Jax “daddy.” She said: “Maybe within the next year we’re going to start trying.”

The Vanderpump Rules star mentioned in the past that he’s up for kids in his life. But right now, they’re settling into married life, loving their new place, and still party hard when they can.

We don’t know if the article was a big surprise to Jax, but he sure reacted to it as if he’s feeling the pressure a bit.

Is Jax pressured by Brittany to make babies?

Over on his Twitter on Friday night, the Vanderpump Rules star shared a small video showing the article in print form, opened to the headline and a photo of the couple. In it, he’s standing with one hand in his pocket. (Cue, more endless rumors about not wearing the wedding ring).

Meanwhile, Brittany’s wearing her bright pink jumpsuit outfit and pointed silver shoes. Jax just captioned that little video with, “Geez, no pressure.” Plus, he tagged both @usweekly and his wife @BNCartwright

Well, maybe he is feeling a little bit of pressure from a broody Brittany. From the tone of it, maybe he never knew Brittany was blithely talking baby-making. But, we know Jax, and he’s got a sense of humor. So, he could just be tagging Brit because he’s teasing her.

Also, details regarding making a baby are a bit personal. If he is pressured a bit, however, it looks like the Vanderpump Rules star’s not overly stressing.

What did you think about Jax Taylor’s reaction to the article about Brittany trying for babies inside the next year? Do you think he’s feeling pressured? Or was he just joking around, as we know he often does? Sound off your thoughts in the comments below.