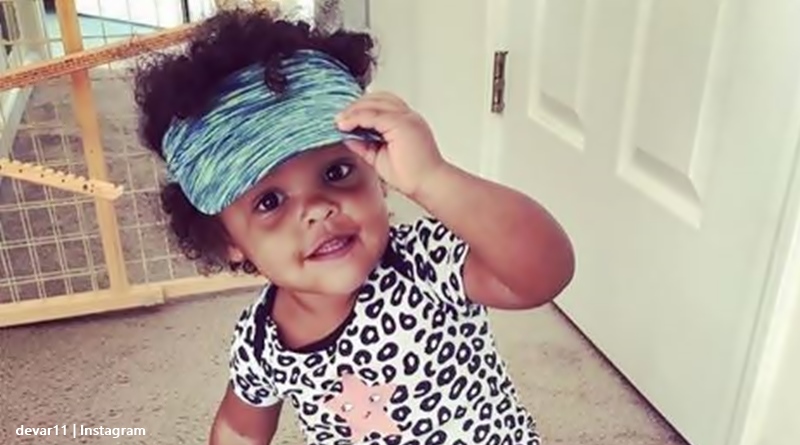 90 Day Fiance brought us Devar Walters and Melanie in Season 3 of the TLC franchise. Fans can recall that they met in Jamaica and made a success of their relationship. Chalk one up for TLC. The popular couple welcomed little Avah in 2017.

Six days ago, she just turned 21 months old. The cutie-patootie, unfortunately, broke her arm a few days ago and ended up in the ER. At the time, she looked like a sad little girl. However, Devar took to his IG on Friday night to bring us an update on his darling daughter.

Earlier during the week, Devar took to his Instagram and just shared a short caption to a pic showing him and Avah at the ER. He captioned it with “Oops, the boss is at the ER.” He never said much about what was wrong on that post.

Fans of the show know he calls his little girl “The Boss” and she’s really stolen his heart. Later that same day, he shared a picture of Avah looking a bit unhappy after she was diagnosed with a broken arm. They were fitting the cast, and fans wondered how she was doing.

Fans of 90 Day Fiance all wanted to know what happened, but Devar never said. Mind you, it’s easy enough for little ones to fall and hurt themselves, no matter how careful their parents are. Other fans just wished the sweet little girl a quick recovery.

Lots of similar messages came in, and some fans begged Devar to please update them.

Devar’s fans didn’t need to wait too long for an update. In his latest post, he told 90 Day Fiance fans, in two words, that the Boss broke her arm again. But, Devar’s not long-winded and tends to tell a story with his photos. In this photo, we can see the cute little pink cast on Avah’s left arm. She’s looking just fine, with those big eyes and big laughing smile. Her little eyes are back to shining brightly. So, it’s really obvious his daughter’s well on the mend.

Fans shared a lot of comments about how little kids somehow manage to cope with properly treated broken arms much better than adults.  In reply to one fan, Devar said, “she’s doing pretty good I’m amazed.”

Other 90 Day Fiance fans with kids who broke arms also interacted, grateful for the update. Here’s what some of them said:

Of course, many best wishes went the way of TLC’s cutest little girl. Some fans really think she’s the best thing to ever come out of the 90 Day Fiance franchise.

Avah is quickly on the mend

What do you think about Devar Walter’s daughter Avah getting better and starting to mend so quickly? Are you happy about the update? Do you know other kids who broke their arms so young? Did they also heal quickly? Sound off your experiences in the comments below.