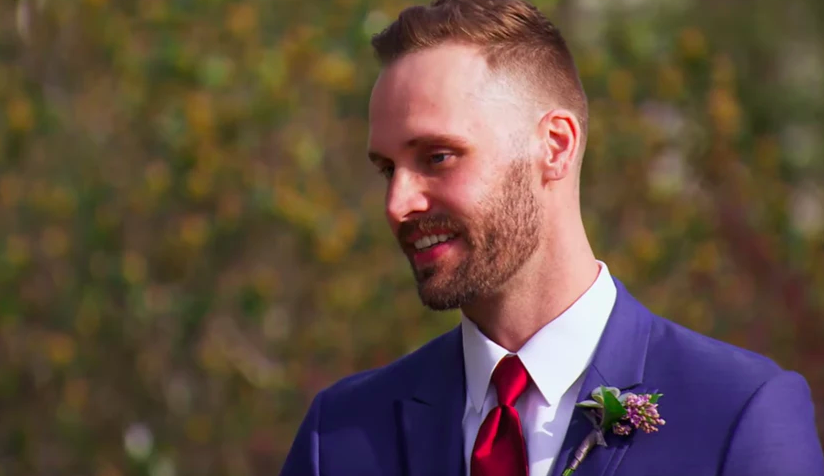 The four Married at First Sight couples packed up from there cozy marriage retreat in the Black Mountains and came back home for serious deliberations this week.  Matt Gwynne and Amber Bowles had such a strong connection from the moment their vows were spoken.  Amber declared that from the moment Matt held her hands, she never wanted anyone else.  The couple quickly went beyond the joys of kissing.  They were the first of the Season 9 Married at First Sight matches to consummate their marriage, but in recent weeks, Amber and Matt have made a mutual decision to back off from physical intimacy to probe deeper into an emotional connection.

Just prior to departing on the retreat, Amber Bowles confided to her best friend, Raven, that Matt Gwynne was hardly being a “present” partner in the marriage.  The groom is still going out most nights with his friends.  One of the tantalizing questions during Married at First Sight: Unfiltered before the September 4 broadcast of Episode 14, “She Loves Me, She Loves Me Not,” was asked by a fan.  She suggested that Raven really had a genuine thing for Amber.  Only time will tell if anything on that front materializes, but Raven broke some heartbreaking news to Amber at the close of the episode.  Matt Gwynne also finally confesses his feelings about being a husband, but not face-to-face with his wife in a September 4 Newsweek feature.

To tell the truth

Virtually none of the Couples Couch veterans, not to mention his wife, bought any of Matt Gwynne’s spiel about the “work” he was putting into his marriage with Amber.  “Just tell the truth,” was the plea that came from those on the comfy seating.  Kristine Killingsworth even said that “BS” was across Matt’s forehead.  He kept stroking the area in anguish.   On her walk with Iris, Amber said she wanted Matt to mean his words more than anything, but his being gone and not giving much below the surface makes them hollow.

Matt Gwynne, at last, comes clean in the new feature and latest episode, admitting that “I just don’t want to be with her all the time.”  The transient groom confessed his failings in communication to his friend, Devon, who said that behavior was “just you being you.”

Gwynne also related that “Amber can be a little bit clingy,” in a segment filmed away from his wife.  He also described her habit of going to the worst-case scenario as “annoying.”  Avoiding the real truth can be convenient at the time, but the end result is devastating for any relationship, no matter how many proclamations of dedication are made.

Do you think that Amber should forgive Matt and fight for their marriage? 💔#MarriedAtFirstSight pic.twitter.com/pqHMEqAAGh

The most bitter tears of all

Matt Gwynne asks Amber for a hug as she goes out the door to contemplate her own marital decision.  At their last dinner, Amber Bowles recounts once more how they are “perfect on paper,” with so much in common.

When she arrives at Raven’s place, saying that her mind is “all over the place,” Amber’s trusted pal breaks the news that he doesn’t want to tell her, but does.

Raven explains that he saw Matt Gwynne at “a bar the other night.”  He elaborates that the Married at First Sight husband was with another girl.  “They were connected,”  Raven describes.  Tears start to well in Amber’s eyes.  “So they were together?” she questions.  Raven nods affirmatively.  Amber Bowles bows and melts into tears in her Papasan chair. Raven looks on, reaching to stroke her back.  She is the one calling “BS” now.  She rises, at last, saying “I don’t want to do this anymore.”

Previews from next week’s Decision Day Married at First Sight show Dr. Pepper Schwartz questioning whether Matt Gwynne can be working on his marriage “while you’re dating.”  The issue for this couple goes deeper than devotion or dalliance at this stage.  It is about a woman learning to find self-worth.

Fans will have to tune in next week on Married at First Sight to see whether Matt Gwynne and Amber Bowles decide to stay man and wife.  The show airs Wednesday on Lifetime.