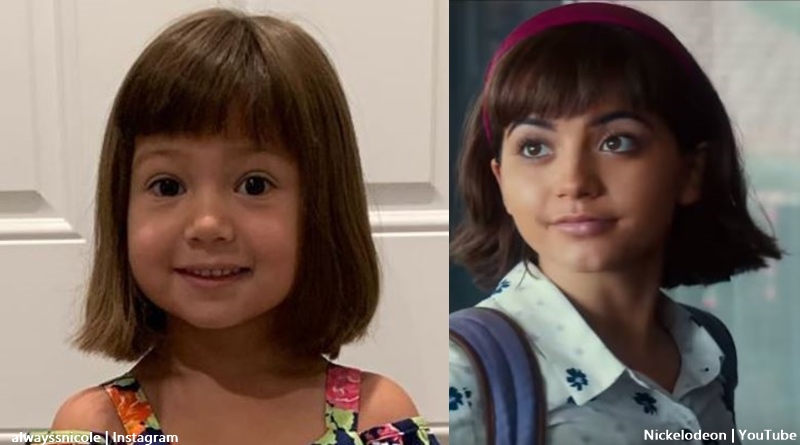 90 Day Fiance fans don’t always agree with Nicole about her relationship with Azan. But, mostly they agree that her daughter May’s a cutie-pie. Taking to Instagram on Thursday night, Nicole shared a photo of May all dressed up for her school photo. So many fans commented that she’s the spitting image of Dora the Explorer, Google must have had a run on searches for comparison.

Fans of the TLC show often see May. Sometimes, she’s in the USA, and other times she’s with Azan, who she calls her ‘dad,’ in Morocco. Fans disagree with her calling a man who seems reluctant to marry Nicole, “dad.” That aside, though, we also see many photos and Instagram stories featuring May on her mom’s Instagram. The latest picture of May was particularly adorable. All dressed up for her school photos, she sported a floral dress that fans want to get their hands on. Her new hairstyle’s nice as well. And, she’s wearing sandals with a strap at the back, which is okay in some areas.

Maybe it’s the tan combined with the hairstyle, but many fans compared the 90 Day Fiance kid to Dora The Explorer. Actually, the franchise brings some very attractive children to the show. There’s also baby Taeyang from Deavan and Jihoon, and Tiffany Franco Smith’s son, Daniel. Pus, her daughter, Carey’s likely to grow up into a beautiful young woman. But this picture of May really shows she’s growing into a beauty. And, yeah, she certainly looks a lot like Dora of Dora the Explorer.

Dora the Explorer – May could play the role, fans agree

IMDb reminds us that “Dora the Explorer features the adventures of young Dora, her monkey Boots, Backpack and other animated friends. In each episode, viewers join Dora on an adventure in an animated world set inside a computer. The titular character seeks viewers’ help in solving a puzzle or mystery she faces in each episode.” The Nickelodeon show, created by Chris Gifford, Valerie Walsh, and Eric Weiner’s been running since August 2014. The live-action adaptation starring Isabela Moner released last month.

Actually, 90 Day Fiance kid May, looks remarkably similar to Isabela. Here’s what some fans said about it on Instagram:

Many similar comments came in, with one follower noting, “Yesssss. Dora the explorer step aside Isabela Moner.”

What do you think about Nicole’s daughter May looking like she could play a role in Dora the Explorer? Do you agree she there’s an uncanny resemblance? Sound off your thoughts in the comments below.