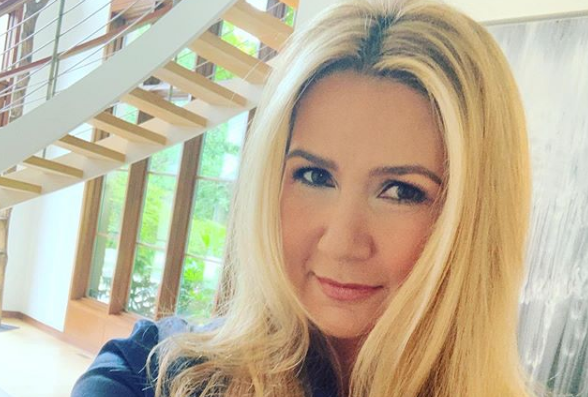 The newest star of Real Housewives of Dallas, Kary Brittingham is already learning how to play the game. She’s doing her best passive-aggressive dig at her co-stars and shading LeAnne Locken.

The wedding took place at the Cathedral of Hope in Dallas and the bride and groom had been together for almost ten years.  RHOD  stars Brandi Redmond, Kameron Westcott and D’Andra Simmons along with Stephanie and LeeAnne. Kary joined as a full-time cast member when Cary Deuber got demoted to a friend of the cast.

What Did Kary Brittingham Say About The Wedding And Her Invitation?

About LeeAnne’s wedding to Rich Emberlin, Kary Brittingham said, “The ceremony was really nice. It was really, really nice. I think their vows were really sweet,” Kary said according to US Weekly. “The reception was, like, a circus. It was so hot and they had no food. It was just like, no, it was not a great wedding at all. Definitely not $4 million, maybe, $2,000.”

Stephanie Hollman said, “she was only a bridezilla with the guest list. It kept changing and she said you wouldn’t be invited until last minute.” Kary Brittingham claimed she was invited to the wedding via text message. She said Stephanie was a very important guest, so that was another little shade byte she threw out about her RHOD co-star. It seems Kary didn’t feel like being around LeeAnn for the time before her wedding was comfortable. She said, “it was just a situation. Not to mention on our trip to Mexico, everything was like, ‘I’m getting married in four weeks and that’s my excuse for being such a bitch.”

There Were People Hanging From The Ceiling

Stephanie Hollman was also with Kary during the interview. She added to Kary Brittingham’s comments saying LeeAnn’s day was appropriate. Hollman said it was appropriate for am “former carny kid.” Stephanie said, “with LeeAnne, because she’s so outgoing and she’s over the top, I literally thought she was going to walk down the aisle with crystals coming out of her booty. She said the dress was understated and the ceremony was classic.” Hollman said in the interview she can look back fifteen to twenty years from now and it will still be in style.

She did go on to say there were people hanging from the ceiling at the reception, so that brought out who LeeAnne really was. “That’s who she is. I truly expected it,” Stephanie said. “It was like two totally different vibes.”

Don’t miss new episodes of The Real Housewives of Dallas on Bravo.