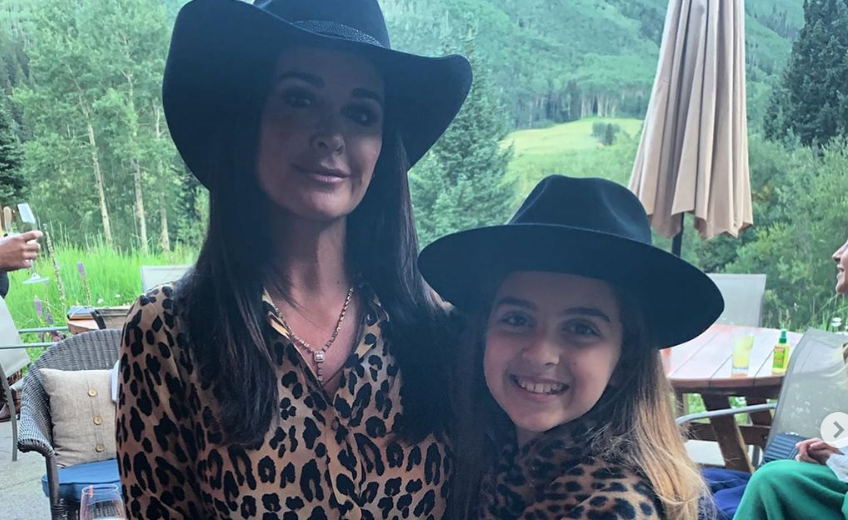 Kyle Richards is speaking out about Camille Grammer’s claims she’s the reason the snarky blonde was not invited back to RHOBH. Camille Grammer had been quoted saying the show was all about Kyle. She says that’s just not true. In interviews, it’s obvious Camille truly believes Kyle is the reason she’s no longer on the show.

Despite what Camille says, Kyle says she didn’t know why she would say that. When asked by a TMZ cameraman Richards said there wasn’t any bad blood between the two of them. Some people still think Kyle was the main reason Camille was gone, but fans should not forget Camille made some crazy comments that were rumored to be racist at the reunion. While they didn’t air, it’s possible that would be a reason she wasn’t asked back.

I may get in trouble for posting this. We both didn’t like this photo but we didn’t take any others together while I was dropping @sophiakylieee off in D.C. We were too busy unpacking , organizing her clothes, going to Bed Bath & Beyind to get essentials and laughing. I thought it was supposed to get easier. My 3rd child that I have taken to college. She’s a sophomore .. yet here I am still feeling like I left a piece of me behind. Just like I felt when I took @farrahbritt & @alexiaumansky . Not going to lie , I hate this part of being a grown up. Yes , I am SO proud and excited for her. ALL of that. I just love being with my kids and having to face the fact that it won’t be as much as I want anymore is hard. Life is changing and I don’t do well with change. Even though there are so many other exciting things to look forward to in life , let’s be honest..our kids are the best part ❤️ I love you Sophia. Have the BEST year ever !! SOOO proud of you

How Does Kyle Richards Feel About New Housewife, Garcelle Beauvais?

The TMZ crew also asked Kyle Richards how she felt about the new housewife, Garcelle Beauvais. Richards said she, “couldn’t be more thrilled and Garcelle was going to kill it as a main housewife.” Like it or not the scream queen has a lot of pull around Beverly Hills, so if she likes Garcelle then she’s starting off on the right foot. Camille and Kyle have never really seen eye to eye even in the beginning. While Kyle Richards is busy getting geared up for a new season, a spot on the big screen, and her new clothing line, Camille will be taking it easy not being on a reality show anymore.

On Twitter, Camille said, “it was up to Kyle. I’m really fine. After the reunion, I didn’t want to come back. It was an awful experience.” While some fans think perhaps Camille made it a terrible experience, the fact remains she won’t be back this season. Season 1 Camille had one last hurrah at the reunion and then she saw her way off into the sunset. It’s anybody’s’ guess whether Camille is writing her own narrative or Kyle is choosing to say she doesn’t know where Camille is coming from. Either way, it follows along with the path RHOBH has taken from the beginning. Some fans say good riddance and some are sad to see her go.