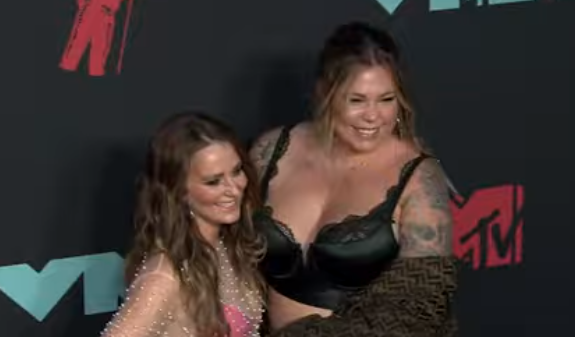 Kailyn Lowry and Leah Messer love to joke with their fans about the possibility of a little romance between them. Truth be told, they’re nothing more than best friends. Kailyn chose to speak out about the rumor on the latest episode of her podcast, Coffee Convos, “I would never date Leah!” Knowing these rumors have been popping up in recent months, Kailyn took the chance to play along for a little bit. So, she made a post to tease their fans on Instagram with a playful post about their alleged “relationship.”

“She’s, like, one of my best friends. We’ve become so close, I would never want to ruin that.” These rumors of a possible relationship between Kailyn and Leah have been popping up for a few months now.

The ladies attended the VMAs together on Aug. 26th, where they had some fun teasing their fans. Some thought this confirmed the rumors of a relationship between them. Kailyn then posted an article on social media that announced they were an “official couple.” According to HolywoodLife.com it turned out to just be clickbait. As seen in the Instagram post, Kailyn captioned the picture with Leah Messer, “Here’s the TRUTH about my RELATIONSHIP with Leah #LinkInBio.”

“I think MTV would lose their s*** if Leah and me actually dated,” Kailyn laughed. “I texted her yesterday and I was like…We might as well just get married. And she was like…yeah, doesn’t everyone want to marry their best friend?! Can you imagine? I think the Teen Mom world would s*** themselves.”

Kailyn and Leah both starred on Teen Mom 2 and developed a friendship over the years. Even taking vacations together with their kids, they each have three.

The Teen Mom 2 Star Speaks On Her Sexuality

Kailyn has been open about her interest in both men and women but spoken on the podcast saying she was unsure if Leah had ever dated a woman. Meanwhile, fans are pushing for Leah to get back with her ex, Jeremy Calvert. Even four years after their divorce, they’re still on good terms.

The friends have separate storylines on Teen Mom 2. Thanks to their joint vacations, fans will see a little bit of them together in this season.

Does Janelle Brown Believes Her Family Was Destined To Be Together?
Is Bachelor Nation Ready For A Gay Lead?
‘Married At First Sight’: Karen Turns Into Sexy Kitten With Totally New Look
Brittany Cartwright & Jax Taylor Already On Board For Baby No. 2?
Meri Brown Hangs With Her Sisters, Ponders Bonnie’s Death